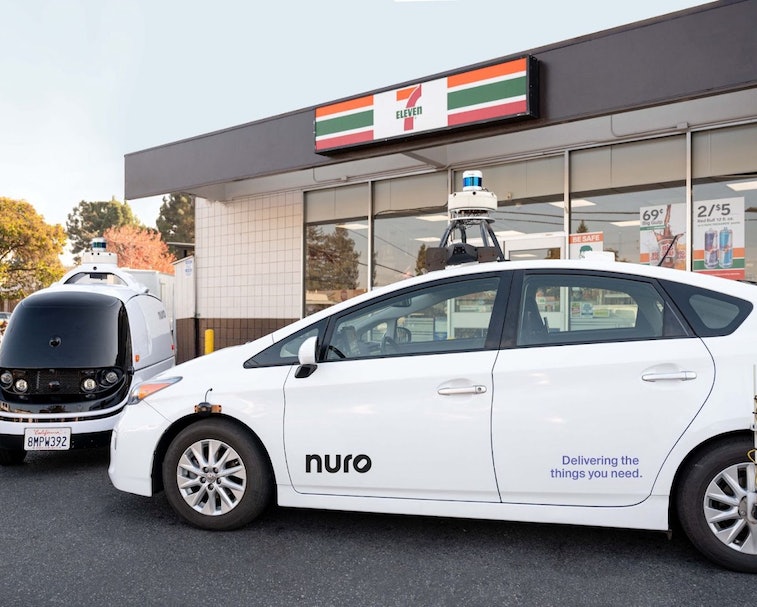 California residents living in Mountain View can now get 7-Eleven Big Gulps delivered to their home shame-free via a fully autonomous, self-driving Toyota Prius. The new service has been made possible through a partnership with the driverless transportation company, Nuro, which promises 30-minutes-or-less deliveries of pretty much any 7-Eleven product available through its 7NOW app (excluding vices like cigarettes and alcohol).

For the moment, each autonomous Prius will be staffed by a human safety driver to oversee operations, but 7-Eleven and Nuro (rather creepily) make sure to note that customers won’t actually interact with the individual “to simulate a completely human-free delivery process.” Although the initial rollout relies on the Priuses, Nuro promises it will soon transition into its completely human-free R2 vehicles in the near future.

Pump the brakes, Tesla — While certainly not as well-known as other EV makers or autonomous driving researchers, Nuro has accomplished far more than certain other companies out there... (Tesla, we’re speaking specifically of Tesla).

While the Technoking struggles to convince everyone his cars’ “Self-Driving Mode” is good enough to begin Beta trials (it most certainly isn’t), Nuro has been busy becoming the first vehicle maker to receive exemptions on certain federal safety requirements, and has been testing its R2 driverless delivery cars since February 2020. To Elon Musk’s relief, however, Nuro doesn’t seem to be in the market for EVs dedicated to transporting people right now, so he can continue his grifting as he so pleases.

Not the only driverless vehicles on the road — As flashy as Nuro’s new services are, it isn’t the only company out there debuting potentially revolutionary new transportation tech. Recently, the Swedish manufacturer Einride teamed up with GE Appliances to deliver a fleet of self-driving trucks for industrial parks, while both Cruise and Waymo have received the okay from California to begin limited autonomous taxi services in the San Francisco area. Expect even more companies to begin their own driverless trial runs in the very near future... hopefully with more options other than 7-Eleven.