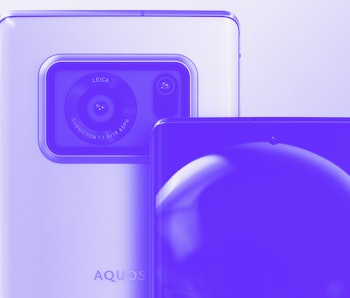 Sharp’s next flagship smartphone, the Aquos R6 (via Android Authority), will include an enormous one-inch sensor for the rear camera, the likes of which have never been seen in mainstream smartphones. Lens manufacturer Leica has partnered with Sharp to create the groundbreaking camera sensor, which is just as large as the one you’d find on premium point-and-shoots like the popular Sony RX100 series.

This really is a huge flex from Sharp. Smartphone camera sensors are generally much, much smaller than one-inch, as a measure of saving both cost and physical hardware space. Sharp has thrown that tradition out in favor of pushing the boundaries of what’s possible with mobile photography. Instead of relying on AI or computational photography techniques, it looks like Sharp’s trying to outmuscle the competition through sheer sensor size. It’s certainly one way of getting better photos with a phone.

If you’re reading this and thinking to yourself wow, I didn’t even know Sharp still made smartphones, you’re definitely not alone. The Japanese company’s phones have dwindled in popularity in the last half-decade or so, particularly in the United States. Sharp still does a fair amount of business in other markets like Japan, though.

No matter how it sells, the Aquos R6 is pushing smartphone camera innovation in a brash manner that’s become increasingly rare in the market. And you can bet bigger names are going to follow in its footsteps.

Unlike anything we’ve seen — We see plenty of weird smartphone cameras around here, but the Aquos R6 stands out even so. The 20-megapixel camera takes up a sizeable portion of the phone’s rear to accommodate that huge sensor. That should allow the phone to take better low-light shots, suppress more noise in night photos, and allow for more natural-looking image quality.

If there’s any bad news about the huge sensor situation, it’s that the phone won’t be capable of using optical zoom for far-away subjects — a feature other industry leaders like Apple and Samsung have prioritized with their smartphones.

A display to match — The Aquos R6 is certainly camera-forward, but it’s also an impressive smartphone. Sharp says its 6.6-inch HDR display puts out 2,000 nits of brightness — much more than you’d get on a comparable iPhone or Samsung device. Sharp reportedly developed an entirely new OLED 240Hz display with a specialized variable refresh rate to reduce battery drain; the S21 Ultra and OnePlus 9 Pro uses similar screens.

It won’t sell, but still — Sharp hasn’t yet announced when the Aquos R6 will be available in Japan, and it hasn’t said whether or not it will make it to the U.S. (our bet is it won’t). And even if it did, the phone would have a difficult time stacking up against the likes of the iPhone 12 Pro and Samsung’s Galaxy S21 Ultra.

Sales aren’t as important here as Sharp’s big bet on this big camera. Choosing to go in this direction when every other major phone company is heading toward multiple more advanced lenses is the best kind of innovation strategy: confident and forward-thinking.