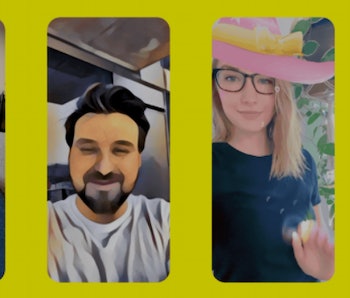 Snapchat is getting some big updates in the Lens department. Among them, Snap now allows developers to bring their own machine learning models to their Lenses, thereby enabling some new smarts. Previously, developers were limited to recognizing a limited amount of objects, like faces and famous landmarks, based on premade templates from Snap.

AI smarts — Two of the first Lenses being introduced that take advantage are PlantSnap, which can identify 90 percent of all known plants and trees, and another called Dog Scanner that can identify over 400 breeds of dogs. For fun, Snap says you can use the Dog Scanner filter on yourself and it'll tell you what breed you most resemble.

Theoretically, developers can train a machine-learning algorithm to recognize just about anything and act upon it — later this year, a new Lens called Nutrition Scanner will be able to give a rating on the quality of ingredients in packaged foods just by scanning the label. The possibilities are seemingly endless.

Snap is also introducing Local Lenses, which lets users build AR worlds with their friends right on top of their actual neighborhoods.

With so many useful new Lenses potentially on the way, Snap has built a "Voice Scan" feature that helps users find the right Lens using voice commands. For instance, you could say, "Make my hair pink," and Snapchat would intelligently find a Lens that can do that.

Bringing Snap content to other apps — Lenses have arguably become the most popular use of AR technology to date, and Snapchat is the reigning king. It might seem counterintuitive, but by allowing developers to bring Lenses and Stories to their own apps, Snap hopes its creative and fun content can reach more eyeballs and entice new downloads. Game developers will also soon be able to offer Bitmojis in their own games regardless of platform, be it mobile, PC, or even console so users can play as their Bitmoji anywhere. If you see all your friends using a cool Snapchat avatar, maybe you'll want one too.

Snap has returned to growth in recent quarters after fixing bugs in its app and releasing an improved Android version. Active users grew 20 percent year-over-year in the first three months of 2020.

The company also unveiled a slew of other new features today, including Snap Minis, mini apps inside chat that allow users to do things like book movie tickets together through Atom Tickets or send breathing exercises to friends from Headspace. New collaborative games will allow friends to do things like build virtual collages together. Snap CEO Evan Spiegal has said his company hopes fun new features like these will help people maintain friendships — and their mental well-being — through quarantine.