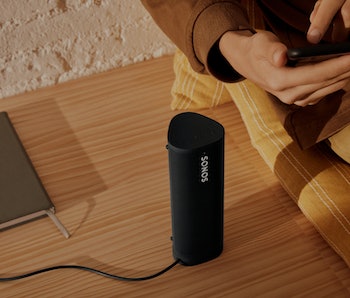 Sonos released another mic-less Bluetooth speaker, so it’ll just be you listening to your speaker and not the other way around. Sonos’ latest portable speaker, the Roam SL, excludes a microphone and the accompanying voice assistant capabilities that you can find in the original Roam model. Also, it’s entering the market as the company’s most affordable portable Bluetooth speaker at $159.

Except for some microphone-enabled features, The Roam SL is pretty much the same as the $179 Roam speaker that was introduced by Sonos last year. They even have matching dimensions, both coming in at 6.61 inches tall, 2.32 inches wide, and weighing just under one pound. But the one big caveat is that the Roam SL is not voice-enabled.

This may be a downside for some, but it’s perfect for those who don’t really need a voice assistant like Amazon’s Alexa or Google Assistant to listen to music. You’ll even save $20 off the original Roam price tag of $179 for Roam SL. Or maybe you’re just someone who’s particularly wary of voice assistants, wondering if they’re always listening. Can’t blame you there.

Fewer features — Like the original model it’s based on, the Roam SL can handle up to 10 hours of continuous playback on a single charge when being played at 50 percent and streaming over Wi-Fi. The Roam SL can last 10 days when you put it in sleep mode and even has a battery saver setting that powers down the speakers when it’s not in use.

With its portable design, the Roam SL is meant to handle all the hazards of being carted around. The speaker has a dust-proof design, drop resistance, and an IP67 waterproof rating so it can work for around 30 minutes while submerged in about three feet of water. You can also pair the Roam SL with another matching speaker or the original Roam through Wi-Fi to get stereo sound.

As we noted earlier, the Roam SL doesn’t have any voice assistants following your verbal commands. No mic also means that it doesn’t have Sonos’ Automatic Trueplay feature that uses a mic to tune the speaker’s sound to whatever environment it’s in. Lack of a mic also means you don’t get the SoundSwap feature that lets you quickly swap audio between nearby Sonos devices.

Up for pre-order — The Roam SL is already available for pre-order on the Sonos website and comes in black and white. Sonos says they’re expecting to deliver the portable speakers for March 15. If you’re in the market for a budget portable Bluetooth speaker, the Roam SL fills the role nicely. If you think the $20 difference is worth the cost of convenience for voice commands, you can always just pick up Sonos’ original Roam speaker.