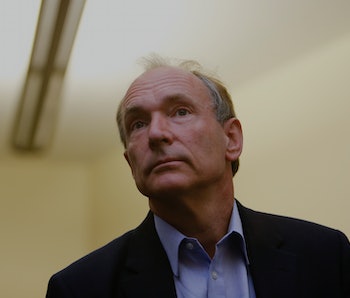 Most NFTs are pretty lame digital artwork, like an 8-bit graphic of Joe Exotic from Tiger King or a music track produced by Elon Musk. The art itself is a digital file that’s infinitely replicable, but NFTs are supposed to imbue them with value by creating a one-of-a-kind edition tethered to the creator, who can realize returns from the NFT each time it changes hands.

Plenty of the NFTs released thus far aren’t glorious artworks designed to give artists financial security and the freedom to continue to create. Instead, many feel like cheap ways for celebrities to cash in on their fame with little effort. One that we’re actually into, however, contains the source code for the modern internet as we know it, the World Wide Web. And it’s being sold by the web’s creator, Tim Berners-Lee.

An auction on Sotheby’s describes the World Wide Web as "the first hypermedia browser/editor, allowing users to create and navigate links between files across a network of computers."

WWW — Most people use the terms ‘internet’ and ‘web’ interchangeably, but they’re actually different things. The internet is the underlying infrastructure that allows computers to send and receive data between one another. The web, meanwhile, is the user interface that lives on top of the internet, through which everyday people can actually browse and view content stored on the internet. It’s the browser you’re viewing this article through, programmed to render webpages in all their colorful glory, and the links within webpages that take you from one page to the another.

That’s what Berners-Lee created in 1989, inventing the internet as we know it today. And the NFT he’s selling is a one-of-a-kind, autographed copy of the code powering it. The NFT includes the original archive of dated and time-stamped files containing the source code, about 9,555 lines long. There’s also a 30-minute animation of the code being written, and a letter from Berners-Lee reflecting on his creation of the web.

Digital collectibles — NFTs, or non-fungible tokens, are digital assets that cannot be replicated. A cryptographic key is created that may include data, like a link to where Berners-Lee’s source code is stored. Once created, the NFT is stored on a blockchain where its ownership is recorded on a ledger and tracked as it changes hands.

The market for NFTs, digital collectibles has boomed in the past year, as artists capitalize on the NFT craze to sell their works. But skepticism remains that the trend is just a fad that will fade over time, and that the NFT market is being propped up by a small number of wealthy cryptocurrency investors buying and flipping the collectibles for a profit.

But hey, if you’re someone who’s made their millions on the internet, getting a signed copy of the original code behind it might be worth it to you. And at least it would finally give Berners-Lee some money for his world-changing idea.

Some people may like buying and selling NFTs as a hobby, just as they might have playing cards in the past. The NBA has found success with its Top Shot platform, where basketball fans can buy famous moments from throughout the sport’s history.