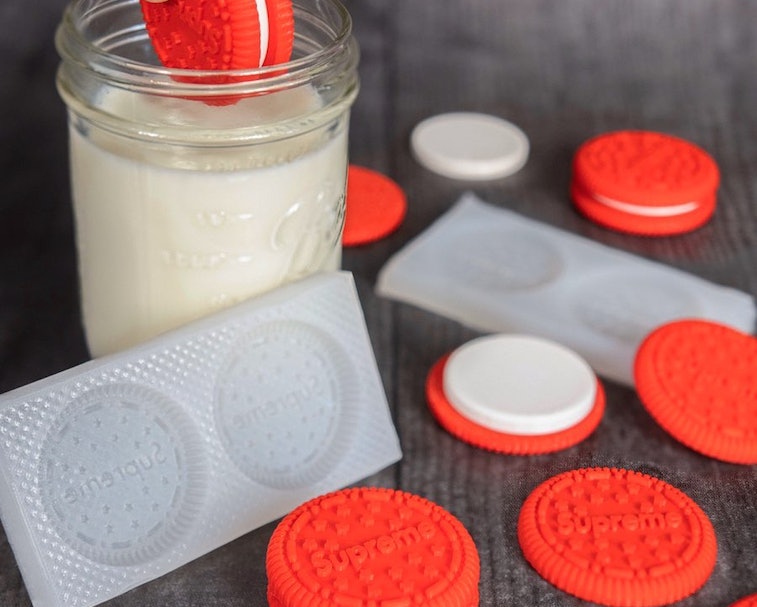 Matty Benedetto of Unnecessary Inventions has turned his talents to the realm of hypebeasts. Seeing the fanfare for Supreme's unreleased Oreo, which is fetching more than $15,000 on the presale market, Benedetto decided to make his own with a 3D printer and the wonders of no bake desserts.

How it's made — In the YouTube clip, Benedetto began by making a 3D model of the cookie. He chose to sacrifice the "box" of Supreme's box logo in order to ensure all the details were rendered accurately. So, no, it's not a 1:1 replica — but we can live with that when we're talking about a transparent bootleg.

After printing the model and creating silicone molds, Benedetto decided to get creative with the culinary portion of his experiment. Instead of baking, he created a no bake mixture made of white chocolate, corn syrup, butter, golden Oreo crumbs, and red food coloring. Once all the ingredients were mixed, he simply poured the batter into the molds and let them sit in the fridge.

Try it yourself — Benedetto has neither decided to sell his concoctions, because cease-and-desists, nor make available his 3D model for the greater public. Fortunately, someone else has. You can find the files for a Supreme Oreo keychain right here, and with some tweaking it shouldn't be too hard to make actual cookies. There's no point in trying to fool anyone, because you couldn't sell the Oreos without the co-branded packaging, but consider it a fun little project you can do on your own.