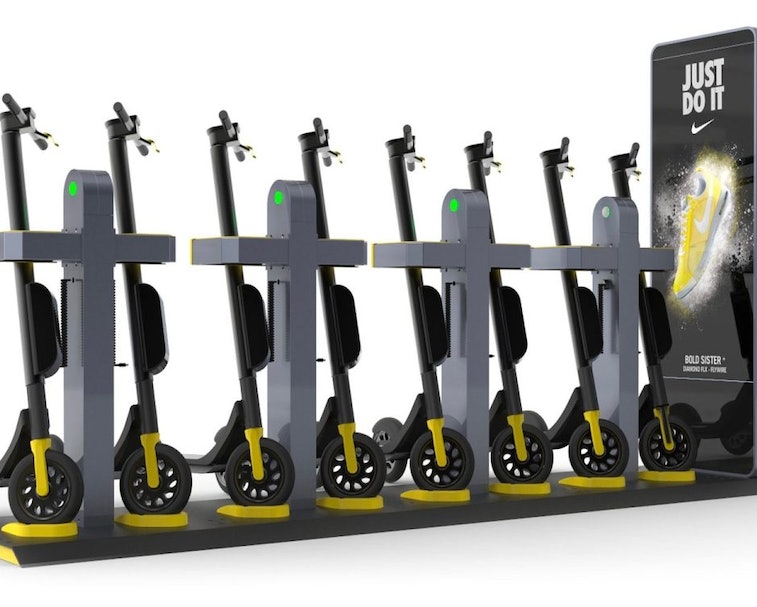 Electric bikes and e-scooters are more popular than ever, with people looking for a socially distant transportation option (they're also just fun). But e-scooters typically have a range of about 15-20 miles, so charging is a frequent concern. Unlike electric cars, there really aren't any public charging stations for micro-mobility. One company called Swiftmile is trying to change that with a network of free, solar-powered charging stations.

Not just a concept — The startup has already begun rolling out hundreds of stations across the U.S. and Europe, unlike other similar stations that are still in the concept phase. Swiftmile simply needs cities to give it space to install the stations and access to a power source, because the solar panels can only generate electricity during daylight hours, obviously. The company makes money through digital advertising billboards attached to each station.

Stations have already been installed in cities including Austin in Texas, Phoenix in Arizona, San Francisco in California, and Tampa in Florida. Swiftmile has raised $11 million dollars to date with plans to expand its network beyond the 200 stations already in operation today.

One issue might be that e-bikes and scooters don't have standardized charging ports, meaning owners may need to purchase an adapter in order to charge up at a Swiftmile station. Companies tend to use proprietary charging ports and batteries as a means to continue generating revenue after the initial sale of a bike or scooter. Swiftmile does offer to sell manufacturers private stations that only charge that company's models of vehicles, however, which could keep owners loyal to a particular brand, but wouldn't be great for competition.

Micro-mobility is maturing — For shared mobility startups like Lime and Bird, these shared charging solutions could help bring costs down tremendously.

In the early days when scooter rental services like Lime and Bird first launched, the scooters broke down frequently and quickly — and the companies to this day still rely on a shadow workforce of gig workers to pick up scooters and charge them. That negates some of the sustainability messaging that they promote, and it's a big cost to the companies. The scooters and bikes themselves have become much more durable, so charging is the next frontier for their evolution that could lower costs and increase adoption.

The billboards could prove a lucrative source of revenue for Swiftmile, as advertisers will be able to reach a tech-savvy demographic that can afford to shell out hundreds of dollars for an electric scooter or bike. We'd just be pleased to be able to charge our rides more easily... and for free.