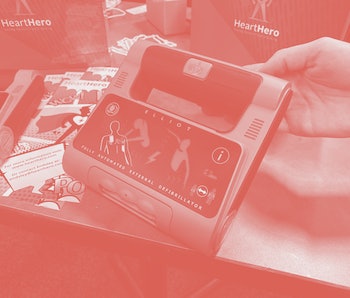 About 647,000 Americans die of heart attacks each year — that's 1 out of every 4 deaths. As a lightweight, portable defibrillator, the HeartHero Elliot would like to cut those statistics down significantly by being simple to use and easy to throw in a go-bag.

Attack — The problem with current defibrillators is that they're bulky, intimidating, and nobody thinks they need one... until they do. The Sudden Cardiac Arrest Association (SCAA) states: "If defibrillated within the first minute of collapse, the victim's chances for survival are close to 90 percent. For every minute that defibrillation is delayed, survival decreases by 7 percent to 10 percent. If it is delayed by more than 10 minutes, the chance of survival in adults is less than 5 percent." Which means we need automated external defibrillators (AEDs) basically everywhere we can get them.

Heart — HeartHero's Elliot, with its Speak & Spell-inspired design (see if you can connect the dots on the name, E.T. fans), aims to be the friendly defibrillator you can keep in your car, a bag, or in your medicine cabinet. It uses store-bought batteries, weighs less than 1lb, displays and speaks out audio and visual prompts for first time users in emergency situations, and pairs with a smartphone app for users to train with in preparation for use.

Hope — While it's still waiting on FDA approval, the company has not yet announced a release date or price point — but says that its device will be more affordable than the bulky, aging models you may be accustomed to seeing in airports or schools. While it's not quite here yet, the vision of a world where anyone of any experience level can help save victims of sudden cardiac events seems pretty appealing.