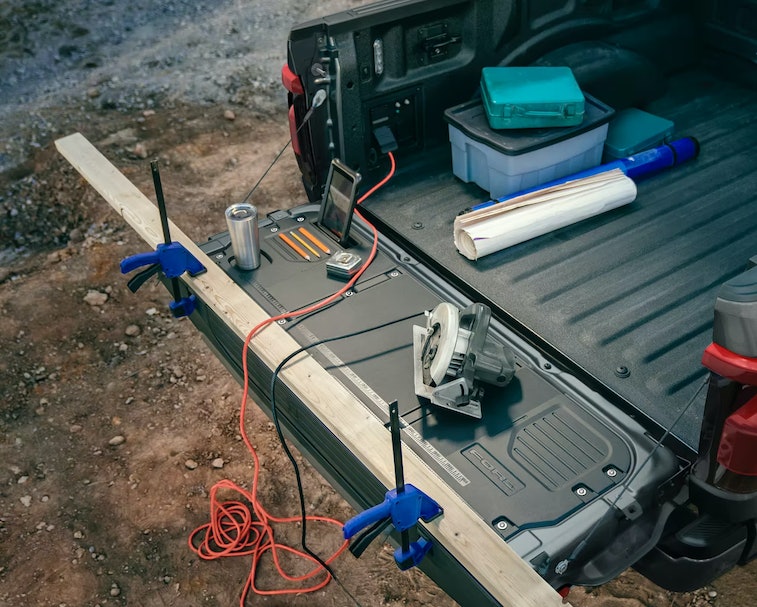 Ford’s first all-electric pickup, the F-150 Lightning, has already impressed us with its expansive battery packs and general capacity for rugged towing. One of the less-highlighted features could potentially be the Lightning’s biggest selling points: bidirectional fast-charging.

The F-150 Lightning’s charging unit is purposefully bidirectional, so it doesn’t just store charge for the pickup — it can also use that stored energy to charge other vehicles. Like jumper cables but much more intense.

Ford demonstrated this capability for the first time yesterday as part of a tour of the Rouge Electric Vehicle Center in Dearborn, Michigan, Electrek reports. We already knew the Lightning’s charger would be bidirectional, but just how powerful that reverse flow would be hadn’t yet been disclosed.

Hell yeah reverse charging — The addition of reverse charging capabilities — especially at the L2 level — is big news for the F-150. Ford had already teased the Lightning’s ability to “power a house” or a work site for days on end, but we didn’t realize just how fast the pickup’s reverse charging would be.

Starting up the reverse charging process is as easy as adding an adapter to your F-150’s charging cable and plugging it into a covert outlet in the back of the truck bed. The exact number of miles per hour the F-150 will be able to provide depends on the receiving vehicle’s specs; the Mustang Mach-E can charge up to 20 miles per hour at the L2 level, for example, but an all-electric cargo van might only get 10 miles per hour.

Not the first, not the last — It’s difficult to overstate the implications of a popular vehicle like the F-150 adding reverse charging capabilities. And 7.5kW charging, at that. The most obvious use-case for fast-charging in reverse would be if another electric vehicle found itself stranded without any juice. The F-150 could really charge anything, though. Going camping will never be the same.

The popularization of bidirectional EV charging could be big news for the future of sustainable energy, too. Imagine, for example, collecting solar power on your roof during the day, storing some in your car battery, and then using that excess charge to power your house overnight.

Other consumer-grade EVs have implemented bidirectional charging in the recent past — the Nissan Leaf is a notable example. But the F-150 is the first to offer L2 charging. Volkswagen has said bidirectional charging will be available on all of its EVs beginning some time next year. Ah, the sweet smell of sustainable innovation.