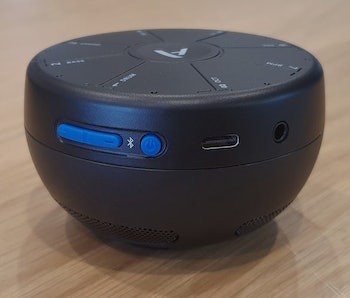 Artiphon has announced a new companion app for its Orba instrument that lets anyone create music videos right from a smartphone. Orbacam, available today for iOS, syncs a series of visual effects to the beat of whatever music you’re playing on the Orba, a palm-sized music sequencer.

The idea is that you might have a pulsing effect, for instance, that highlights different elements in a video and changes intensity with the beat you’re playing on the Orba. The video below demonstrates what this might look like.

Simplicity — The Orba, if you don’t know, is a $99 piece of hardware that acts as a handheld synth, looper, and MIDI controller and lets you make music on the fly, without the need for more sophisticated desktop software or any real audio-mixing experience for that matter.

The puck-shaped device features a series of buttons with different modes — bass, drum, etc. — that users can toggle between and play with sounds like kick, snare, etc — as they lay down a track. The Orba offers some more sophisticated functions for those willing to go deeper, but it’s basically an idiot-proof way to experiment with making music. Our review describes the simple process of recording a track with the device:

To lay down a track, all you need to do is turn it on, and press the A and then 6 / Record button. You'll hear a metronome, while the LED's around the edge of the device illuminate one after the other on the beat. Tap out a beat or a melody and hit the A button to end, and whatever you've recorded will start looping. You can then overdub as many additional parts as you'd like, erase ones you don't, or simply let the loop play while you test out different sounds before recording them.

No post-production — You can imagine with the Orbacam app that you could add some emotional impact to any type of video you might want to share on social media. Maker Artiphon says the app “lets you create a musical selfie on the go, add a meditative tone to your morning coffee, or compose the orchestral score for sunset in real time.”

Songs don’t need to be pre-recorded, so you can have some spontaneous fun filming a video and tapping out a beat. But you can also import videos or photos from a camera roll and create audio after the fact. When you’re done making your music video, sounds and visual effects are baked into the export.

Orbacam is available on iOS today. No word on an Android release.