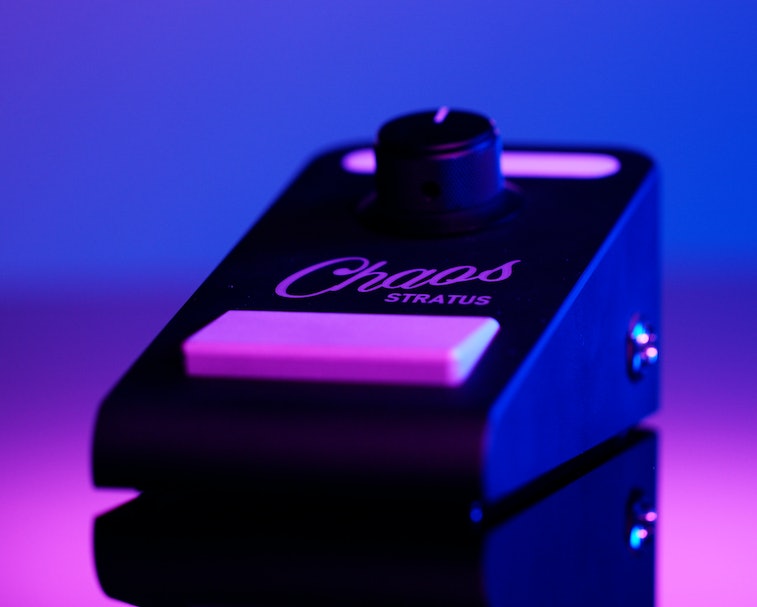 For guitar players, pedals are a way to create and adjust their guitar's sound to make it just right — maybe you want to bring in a reverb effect, or you want to add fuzz or distortion to your sound. To do this, you usually have a separate pedal for each effect, or maybe a multi-pedal device. Either way, if you want lots of effects, you're going to have to lay down a lot of cash... and if you're just trying things out, you might find yourself with a pedal you don't even like. But what if you could use a smart pedal capable of a whole array of effects? That's the question Florida-based startup Chaos Audio is asking. Its answer? The Stratus pedal.

Plug your guitar (or ukulele, bass, keyboard, theremin, or anything else you want to run effects on) into the Stratus pedal and use the accompanying app to choose from a huge selection of effects. You can also chain up to five Stratus pedals together, and you can customize effects and save them as presets.

Buy and still get to try — The Stratus strikes a balance between cost and convenience. Having dedicated pedals for each effect is less clunky, but the Stratus allows for an affordable setup, and a "continuously updated" selection of digital pedal effects found through Chaos's online library means you're never supposed to run out of ways to experiment and shape your sound. Chaos Audio's founder, Landon McCoy, said he was inspired to create the product during college when he couldn't afford a full pedalboard experience.

Even if you already have a pedalboard, Chaos says you can use the Stratus as a stand-in for those times when you don't have the exact pedal you want, instead of running to the store and buying it. The Stratus also doubles as a loop pedal, which can cost hundreds of dollars on its own, and works as a tuner, too, via the built-in LED strip. Firmware updates and charging of the 3,000 mAh battery happen via USB-C.

Back the project — This isn't the first time someone has tried to make a "multi-stomp" pedal, as it's been called. Music hardware company Zoom created a similar pedal and online effects store. It never found commercial success despite positive reviews, and the company eventually discontinued production. Maybe Chaos Audio will have a better go of it — Zoom's product was lacking particularly in the Bluetooth department because you could only preload effects (or chains of them) onto it, you couldn't control effects from your smartphone as you played.

Pricing starts at $199 for the Stratus. Pre-orders started on Kickstarter on November 1. It's supposed to ship in July 2021, though since this is a crowdfunding campaign that deadline could change. A will all such campaign, you're making a bet that Chaos Audio will follow through. The company has raised over $6,300 of its $25,000 goal to begin an initial production run in only three days, so at the very least it looks likely it'll hit its target.