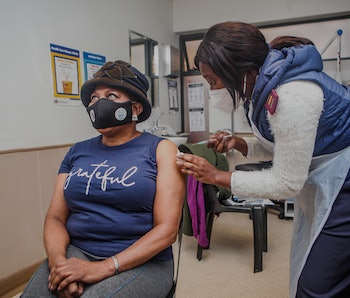 Anti-vaxxers are utilizing a federal vaccination database to spread fear around the COVID-19 vaccine because, apparently, Facebook’s misinformation network wasn’t enough. The Vaccine Adverse Event Reporting System (VAERS) is being misused to purposefully make the COVID-19 vaccine’s side effects seem much worse than they actually are, according to a new report from NPR.

The VAERS is meant to be a place where those who have received vaccines can speak to their experiences after being vaccinated, giving the public a legitimate way to understand first-hard vaccination experiences. But NPR’s analysis of the database turned up far too many false or coincidental reports for it to be taken seriously in its current state. People have taken to reporting random health events and claiming they’re related to being vaccinated, which kind of ruins the legitimacy of the project as a whole.

Crowdsourced information — especially around health — can be invaluable. But with very minimal moderation (read: none) and no plans to change that in the near future, VAERS has become a case study in how crowdsourcing can end up doing more harm than good.

This is nothing new — The VAERS database has been around for decades now and was created partly in response to the anti-vax movement. The goal of the project was always to leave the database as open as possible so the general public could speak to their experiences with vaccination.

But the database has always had a problem with misleading information. A death can be reported in conjunction with a vaccine, for example, even if that death was caused by another illness. As you might expect, proponents of the anti-vaccine movement love to use this data for graphics and other reporting.

For a very long time, individual reports from VAERS have been cited as if they were full studies of the side effects of vaccination. The individual stories are often taken out of context and used as if they’re verified — which they are not and never have been.

Not changing any time soon — Here’s the kicker: the Centers for Disease Control and Prevention (CDC) knows about the issue and has no plans to change the system. This is partly a problem of function — VAERS can do what it’s meant to, at least on occasion. It’s one of the easiest ways the CDC can be alerted quickly in the case of severe vaccine responses, for example — it’s how the agency learned about the COVID-19 vaccine’s blood clot problem, for example.

Walter Orenstein, a former director of the U.S. immunization program at the CDC, says he thinks keeping VAERS as open as possible is the best way forward. "My feeling is that this is what we have to live with," he says, "because I think it's very important that we have an open and transparent system.”

Given that VAERS is absolutely being used for harm, the CDC’s steadfast refusal to update the system or introduce new moderation methods is frustrating. If the rise of social media has taught us anything, it’s that leaving such systems wide open without some system of checks in place can lead to disaster.

More like this
Will Gendron
Sep. 15, 2022
Culture
I can’t stop watching fitness influencers risk life and limb for viral fame
Annie Rauwerda
Sep. 19, 2022
Culture
A ragtag community is keeping this aughts Wikipedia gadget alive
Jackson Chen
Sep. 17, 2022
Tech
Zero’s long-range e-motorcycle is a beast on and off the road