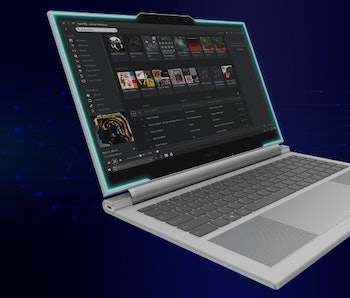 We're currently right in the middle of this year's all-digital CES, which features a dizzying array of new gadgets and tech ranging from the very cool to the very WTF. A Hong Kong-based laptop manufacturer, Nexstgo, has provided us with a new computer that's a little bit of both: The Avita Admiror II, which features not only three separate webcams, but also a ring light built into the lid that surrounds the display.

Yes, three separate webcams — Unfortunately, there really aren't a whole host of other specs to detail just yet, but hey, Avita Admiror II's level of Gen Z tailoring is worth examining on its own. According to Engadget, Nexstgo's newest model will include three cameras to offer “Close-up,” “Medium Close-up” and “Wider Shot” angles to users.

On top of that, the concept images also show off the ring light feature lining the inner lid, which honestly we're kinda surprised has taken this long to show up on a device. Judging from the renders, the laptop will include a sizable trackpad, fingerprint reader, and hinge design featured in the previous Admiror model, along with larger speakers that include an "integrated subwoofer feature."

A whole lotta extra — Let's be real here: The actual percentage of people who truly could benefit from multiple webcams and a built-in ring-light are few and far between, but hey, if you got it, flaunt it, right? Streaming is on the up, as are services like OnlyFans. So maybe there's a bigger market for this than we think.

Even if you don't got it, so to speak, that ring light will help make it look like you do. There aren't any price tags or release timelines yet, so in the meantime, how about instead investing in a ridiculously large ring light until more Admiror II details emerge? For those looking for actual, sensibly sized (yawn) lighting accessories, we have a rundown of some of the best of those, too.