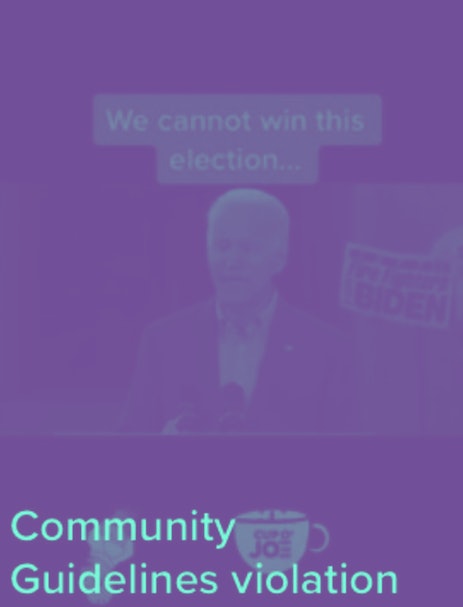 TikTok's attempt to police its platform for deceptively edited clips of Joe Biden isn't going so well. The videos violate TikTok's "Misleading information" policy because they're trimmed to make the former vice president say, "We can only re-elect Donald Trump," leaving out the rest of his comments.

The full excerpt of Biden's speech continues, "We can only re-elect Donald Trump if, in fact, we get engaged in this circular firing squad here. It's got to be a positive campaign." The shortened clip obviously leaves out a lot of context. According to Business Insider, the video has been reposted at least a few times by large conservative TikTok accounts including @therepublicanhypehouse, which has nearly 300,000 followers.

TikTok has removed the clips when reported by Business Insider and Media Matters, which also wrote an article regarding the issue. But the company clearly doesn't have the proactive tools necessary to take these clips down before they spread. If you have a policy and don't enforce it, or only do so lightly, what's the point?

In its misleading information policy, TikTok specifically forbids, "Content that misleads community members about elections or other civic processes." Some on the right have argued that TikTok users are discerning enough to recognize that the edited clip of Joe Biden telling an audience to elect Trump is so outrageous that it must be a joke. That may be true, but it often doesn't take much to fool people into taking these things seriously.

"The fact is that it's a video that, when cut a certain way, implies something that did not happen," Media Matters researcher Alex Kaplan told Business Insider in an interview. "And maybe they think it could seem like a joke, but who's to say that someone couldn't think it's real and take it seriously? They don't know that for sure."

TikTok says that it uses a combination of automated and human-based moderation to monitor its platform but clearly its methods aren't sophisticated enough to catch nuanced misinformation like this video. Other platforms use fingerprinting techniques to tag videos like this one so machines can automatically catch them when they're reposted by other users. It doesn't seem like TikTok does that.

With scrutiny of TikTok already at an all time high thanks to its connection to China, the upcoming presidential election could be a trying time for the popular app if it, like other platforms, fails to get a grip on disinformation.