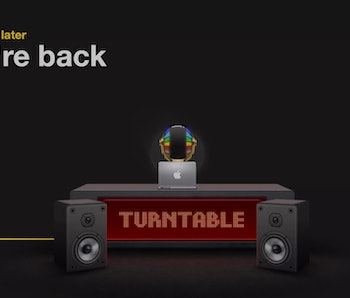 After running out of money and closing down in 2013, the much beloved social network Turntable.fm has quietly relaunched — and under two different entities. Turntable.fm is being helmed by original founder Billy Chasen, while another project, Turntable.org, appears to be starting up with other employees from the original .fm site.

Vibe from home — For those unfamiliar with Turntable.fm, the site lets you create a virtual stage and then DJ songs for your friends, with a chat panel on the right where your audience can cheer or jeer your music tastes. Users can come and go into a room, and even be invited to co-DJ with others. It's basically the epitome of "literally just vibing" with your friends, from a COVID-safe distance. A quick search on Twitter shows the site's cult following is quite excited about this relaunch.

Right now the .fm website requires a password to gain access, with a request for you to email your favorite song. If the company likes your pick, you'll get in (I'm not optimistic — I sent "Smooth" by Santana ft. Rob Thomas). The .org version doesn't appear to have launched yet.

According to The Verge, which gained access to the new Turntable.fm, the reincarnation is faithful to the original site. The only major difference seems to be the song selection, with songs piped in from YouTube rather than an officially licensed catalogue. Users of the new Turntable.fm will presumably be faced with YouTube's annoying pre-roll ads to disrupt the vibe between tracks, which is a definite downside of this implementation. There's also a SoundCloud integration for playing mixtape tracks, but apparently it doesn't work yet.

Business model problems — The original Turntable.fm operated under provisions of the Digital Millennium Copyright Act (DMCA) that allow for "internet radio" services like Pandora to offer free music playback without negotiating individual deals with music labels. The provisions required that Turntable.fm take certain steps to create a "non-interactive" experience, such as limiting the number of times one could play a song in an hour.

Still, Turntable.fm was operating in a legal grey area by not paying artists, and eventually it signed licensing agreements to pay labels for spinning their catalogues. The agreements limited operation to the United States, however, meaning the company had to shut down international users. It then spent years trying to secure agreements abroad, which came at a big cost. At the same time Turntable.fm struggled to monetize its free service while compensating artists. It could have implemented ads like Pandora, but due to Turntable's inherent nature, audio advertisements would have taken away from the experience as a DJ curating a mood.

Turntable.fm tried instead selling subscriptions that offered users digital goodies like premium avatars and stickers to put on your virtual DJ laptop. That didn't take off in meaningful numbers, and Turntable.fm eventually pivoted to premium live shows before shutting down.

A premium service like Turntable.org wants to become might be what it takes to make the idea sustainable. Or maybe Chasen has more in store for the new Turntable.fm.