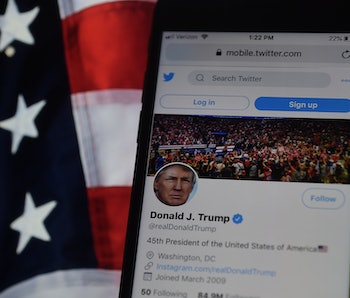 There are less than 50 days until the 2020 presidential election, and some states will start early voting as soon as September 18th. Twitter says it wants to help its users sift through the chaos of its platform and quickly find information on how to vote with its new U.S. election hub.

Stay informed — The hub can be found at the top of the Explore tab and provides users with an array of curated information, including live streams of debates and a tool that shows the candidates running in a user's state. There will also be localized news and resources, like PSAs telling users how they can vote or request an absentee ballot. Of course, some groups might claim Twitter is biased, but the company says the information it's using here is being collected from nonpartisan government and voting advocacy organizations.

Facebook has similarly begun directing users to reputable information with a banner on the U.S. election atop the News Feed and on Instagram pointing to information about voting in each state.

Twitter's first PSA is already live. It lists links to official government sites where users can learn everything from how to register to vote, to how to vote in-person safely amid the COVID pandemic.

Twitter has been more aggressive than Facebook in combatting misinformation and disinformation in advance of the upcoming election. It banned political ads altogether while Facebook will only stop accepting new ones a week before the election. It also labeled a tweet from President Trump as misleading before Facebook ever did so. That move prompted Trump to sign an executive order attempting to modify Section 230 privileges that give social media companies leeway to moderate speech on their platforms.

Twitter is a mess — Still, Twitter's new hub is an acknowledgement that its platform has always been a tough place to quickly find information. Users have to do a lot of legwork themselves, like searching to find reputable government accounts, and the search tool can return a lot of noise that's not personalized for you. Creating a centralized hub, Twitter is at least doing some of that work now that it should be doing — it did create this messy platform in the first place, after all.