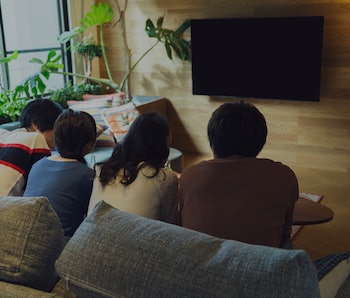 Well, it looks like capitalism is at it again, here to wring you out for every possible cent just so you can enjoy a movie. Here’s today’s nightmare experiment: a streaming device that counts how many people are in your living room and then charges you for each viewer when you go rent a movie or television show. If this sounds like your idea of a good time, we have some exciting news for you — this is a real product that might find its way to your home in the not-too-distant future.

XCINEX’s Venue is the entertainment industry’s latest attempt to capitalize upon the huge number of people streaming new media content from home. Rather than paying a flat fee to rent a new movie, Venue will allow production and streaming companies to charge for individual “tickets” to streaming events by utilizing Xcinex’s head-counting technology. You won’t be able to stream until the number of purchased tickets matches the number of people in the room with you.

So far Xcinex has raised more than $330,000 in early investments, and the company has recruited top execs from companies like Warner Bros. and Sony to bring the Venue to the mainstream. That backing could prove to not be enough for success if the product isn’t adopted by the media industry and its users. There are… quite a few barriers to the Venue making it big.

So I have to give up my data to stream? — The Venue carries out its dirty work (people-counting) using a small camera device that plugs into the HDMI port on your television. That camera uses artificial intelligence and machine vision to count the number of people watching a program at any given moment.

We’re living in a state of constant surveillance, so this scanning might send up some red flags. Is Xcinex storing facial scan information for later use? Are pictures of my living room being streamed to someone’s server?

According to the company, these fears are unfounded. “Venue is designed with consumer privacy as a top priority,” the company’s FAQ reads. Xcinex goes on to explain that viewer count is done instantly with every bit of data encrypted end-to-end; no personal information is stored on the device itself, either.

Could this become the new go-to? — The brief answer, in our opinion, is that the world isn’t ready for a platform like Venue, at least in the short term. There are simply too many barriers to the device’s success. First there’s the problem of convincing media companies and producers to host their content on the platform, which, as of right now, has a user base of next to zero.

Then there’s consumer buy-in to consider. Will the general public be willing to invest in a Venue camera before even knowing whether or not it’s going to keep them entertained in the long term? The beauty of streaming at home is the simplicity: start a show on the couch, finish it on your phone in bed, all with the technology you already own. Venue doesn’t work with phones or projectors or laptops or most televisions made before 2016.

This is not to mention the fact that Venue won’t even launch in the U.S. until Q4 2021 at the earliest — by which point the vast majority of the country will be vaccinated against COVID-19 and ready to sit in movie theaters again. There’s a reason per-person ticketing works best for in-person events: you’re paying for a full experience. Venue just can’t match that.