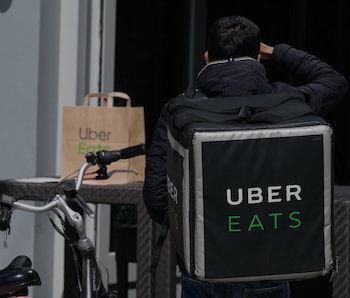 UberEats, Postmates, Grubhub, Seamless, and DoorDash are still operating after curfew in certain cities, according to BuzzFeed News. We have independently confirmed all of these services are not sharing specific city information, with the exception of Uber. They are all working with local officials to determine how they will operate in accordance with curfews.

It’s complicated — An Uber spokeswoman said: “Some cities have requested that we suspend operations during curfew hours while others want to ensure Uber is available for essential services." In addition to this statement, an UberEats spokesperson told BuzzFeed News they will not operate in Minneapolis, San Francisco, and Oakland, but will maintain their essential status in New York, Philadelphia, and Washington, D.C. Anecdotally, UberEats is also down in Los Angeles after curfew. Police have used riot gear against protesters in all of these cities.

The companies declined to mention any specifics about ways to protect those working after curfew. A Grubhub spokesperson said, “In all cases, we’re monitoring closely and will not hesitate to take action if needed to protect the safety of our drivers, restaurants, and diners.”

Postmates reportedly sent letters to local municipalities underscoring couriers’ essential worker status at the beginning of the pandemic, which local law enforcement should be well aware of at this point. The dozens of curfews being enforced nationwide generally allow caveats for those going to and from work, but non-protestors running errands like grabbing groceries have still faced the violence of flailing police officers.

A DoorDash spokesperson said the company is “tailoring operations based on the guidance we have received from governments, such as reducing hours to abide by local curfews.” They also referenced DoorDash’s participation in #blackouttuesday as the reason for delaying the announcements of any new initiatives. POC — particularly Black, brown, and undocumented people — are more likely to hold gig economy jobs.

If you absolutely need to order — If your fridge is looking sparse and your local Target is no longer of this world, order well in advance of curfew. Some cities have fluctuating curfews based on the police escalation of protests, so your 6 p.m. curfew could suddenly move up an hour or more. Ordering midday to early afternoon gives your couriers not only enough time to get to you, but to also get home safely before curfew. If you can, also tip even more than usual to help offset their inability or understandable hesitance to work at night. This advice also goes for chains like Pizza Hut and Domino's too, which have been overwhelmed with curfew demand.

If you're a courier — Dropping off a delivery is the easiest proof of your essential worker status, but between pickups, you may look more "suspicious." Any company decals or merch on your person and vehicle is helpful here, but resist the urge to create your own signage. If you're stopped, immediately say you're an essential worker delivering food for [insert company here]. Calmly announce you're reaching for your phone to show your active driver/courier version of the app first and then slowly do so.

Some people have not received some or all of the curfew push notifications. You can also set a news alert for ["your city" curfew] in Google Alerts and in the "Show Options" dropdown menu set "How often" to "As-it-happens."

Our and BuzzFeed News’s reporting for this story was inspired by Bitch Media columnist Izzie Ramirez.

More like this
Andrew Paul
8 hours ago
Autopilot
Tesla steps on the Autopilot accelerator as gov’t probes fatal crashes
Will Gendron
5.12.2022 12:00 PM
Yikes
El Salvador's bet on bitcoin has been as volatile as expected
Andrew Paul
5.11.2022 7:50 PM
Iconic
This summer’s vibe is a $400K Zillow listing collapsing into the ocean