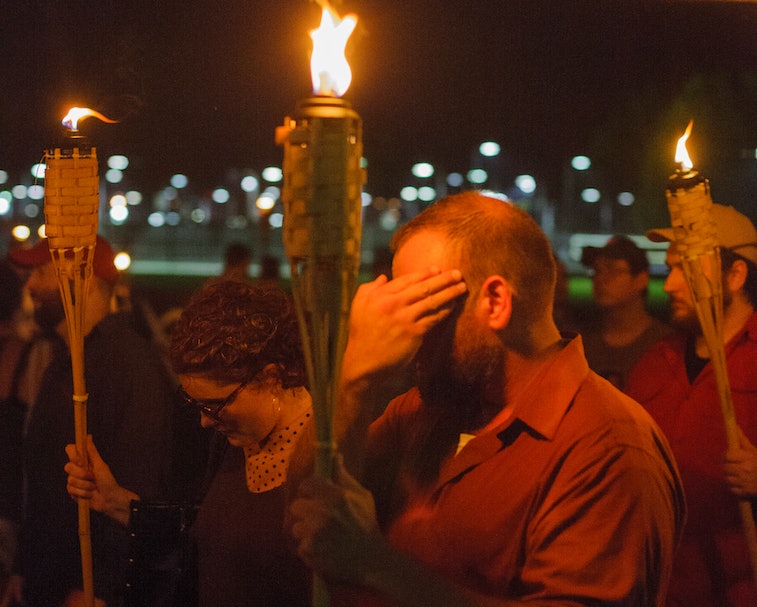 We already knew there were some ties between creepy facial-recognition software company Clearview AI and the alt-right, but a damning and extensive exposé by Luke O’Brien at HuffPost details just how extensive the connections are between it and prominent white supremacists. It turns out Clearview AI CEO Hoan Ton-That has an extensive network of xenophobic, anti-Semitic, homophobic, and racist buddies, many of whom he's been hanging out with since at least 2015, when the precursor to Clearview AI, a service called SmartChekr, was still a work in progress.

Questionable company — The HuffPost piece posits that in addition Richard Schwartz and Ton-That, Smartchekr’s founders also included Pax Dickinson and Chuck Johnson. All were active on a Slack channel for the now-defunct, white supremacist crowdfunding site WeSearchr. In an exchange on the channel, Ton-That used a Chinese slur in reference to Representative Judy Chu. Ton-That also reportedly socialized with Johnson frequently, and attended at least one dinner with Richard Spencer.

In a statement to The Verge and HuffPost, Ton-That denied that any of this suggests he's a racist himself, or that he should be judged for the company he keeps:

“I am not a white supremacist or an anti-semite, nor am I sympathetic to any of those views. They are abhorrent and I reject them wholly and without reservation ... I learned about the world, its inhabitants and ideas online. It had not always been a straight path, and it had not always served me well. There was a period when I explored a range of ideas—not out of belief in any of them, but out of a desire to search for self and place in the world. I have finally found it, and the mission to help make America a safer place.”

Smartchekr was riddled with racists — Smartchekr’s workforce included notorious racists and anti-Semites Tyler Bass, Marko Jukic, and Douglass Mackey (better known as Ricky Vaughn). Mackey briefly served as a consultant, but Bass was a company investigator, and Jukic marketed the service to police departments up until March 27. Bass reportedly attended the Charlottesville march (as did Dickinson) where a neo-Nazi attack claimed the life of protestor Heather Heyer, and injured others.

Early investor Peter Thiel, everyone’s favorite libertarian billionaire and Gawker-killer, is no stranger to supporting and influencing technology to move right. Johnson, however, may have played the biggest role in the federal adoption of Clearview AI. HuffPost sources, including former white supremacist and Breitbart employee Katie McHugh as well as Johnson’s own Facebook page, indicate his desire to shop the technology around as a deportation resource. ICE is currently one of Clearview AI’s clients.

Ton-That told HuffPost “Charles Johnson is not an executive, employee, consultant, and doesn’t have a board seat at Clearview AI,” but refused to clarify whether Johnson has an equity stake.

When we first found out about Clearview AI's technology and how it was being misused by the wealthy and by law enforcement, we were worried. When we learned it was planning to put its tech in AR googles, we were scared. Now that its connections to the lunatic fringe are clear, we're angry. Building a tool that could erode privacy for ever shouldn't just be prohibited, it should be punished.

More like this
Andrew Paul
6.23.2022 4:30 PM
Hard Pass
Amazon's plan to have Alexa deepfake dead relatives is even worse than it sounds
Matt Wille
16 hours ago
Culture
FCC demands TikTok be pulled while domestic data threats persist
Matt Wille
12 hours ago
For the kids?
California bill would force every website to verify your age