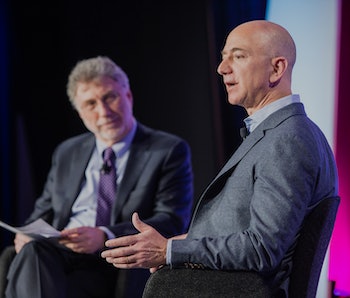 Outgoing Amazon CEO Jeff Bezos took the time yesterday to release a statement about corporate taxes via the About Amazon website. The statement is just three sentences long and could’ve been even shorter, really. Here’s the gist: Bezos supports a rise in corporate tax rates and thinks infrastructure is important.

“Both Democrats and Republicans have supported infrastructure in the past, and it’s the right time to work together to make this happen,” Bezos writes. “We recognize this investment will require concessions from all sides — both on the specifics of what’s included as well as how it gets paid for (we’re supportive of a rise in the corporate tax rate).”

Though the statement is short, its message is loud: the leader of one of the world’s largest corporations supports tax increases for big businesses. When it comes to corporate wealth, Jeff Bezos still reigns very much supreme. His opinion holds enormous weight in both the tech industry and in the world writ large.

And then there’s the fact that Amazon as an entity has been very combative on the subject of taxation as of late. Does the company’s stance match up with that of its founder?

Tax hikes for a good cause — Bezos’ statement is referring to the Biden administration’s forthcoming infrastructure revitalization plan, which is expected to come with a price tag somewhere in the realm of $2 trillion. The plan includes billions in affordable housing, electric vehicle subsidies, high-speed broadband access, road/bridge construction, and public transit expansion.

But Amazon hates taxes — Biden’s plan has angered much of corporate America, with plenty of executives arguing higher corporate taxes will do more harm than good. Amongst those corporations vocally opposed to the tax hike is none other than… Amazon itself. Talk about a twist.

A few weeks ago, Sen. Elizabeth Warren shared a video on Twitter calling out major tech corporations like Amazon for manipulating tax codes. Amazon, for example, effectively paid just 4.5 percent between 2018 and 2020, using a series of creative loopholes to reduce its payments to the federal government. Amazon did not take this criticism kindly, instead lashing out on Twitter and essentially starting a full-on social media war with leading Democratic lawmakers.

Bezos’ statement is even more noteworthy in this context. If we read between the lines, it reads almost like an apology for starting that Twitter war in the first place.