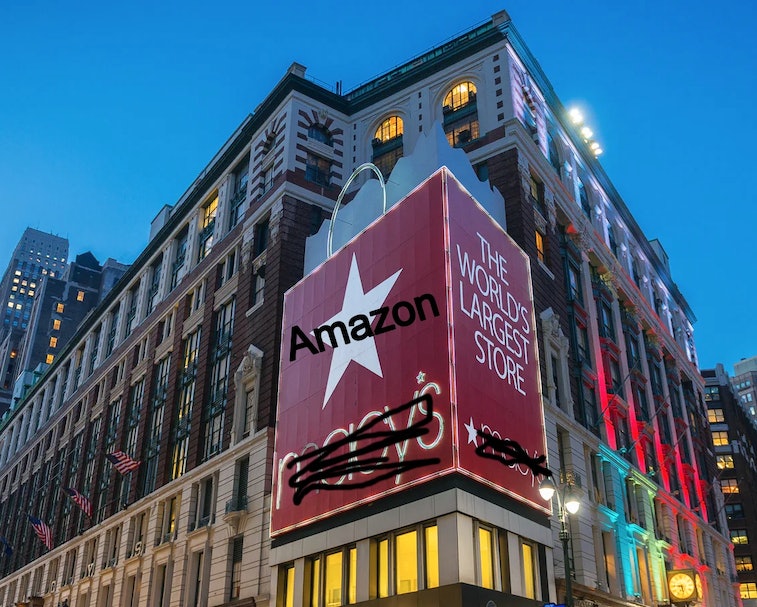 Macy’s is suing the landlord of its famous Herald Square location to prevent Amazon from nabbing the iconic billboard that has advertised the nearby department store for over fifty years. In a state lawsuit filed against the Kaufman Organization, Macy’s argues that suddenly advertising its main competitor directly above their most recognizable shop would cause “immeasurable” harm to the business, which... okay, fair.

Although Macy’s occupied the advertising space since the early 1960s, its lease expired last month, and company representatives claim the Kaufman Organization was already in talks to ink a deal with Amazon before they had a chance to renegotiate. “The damages to Macy’s customer goodwill, image, reputation and brand should a prominent online retailer (especially Amazon) advertise on the billboard are impossible to calculate,” plaintiff lawyers argue in the suit.

Bezos Baby Behavior — The news that Amazon is trying to publicly humiliate Macy’s of all companies shows just how nihilistically ruthless and vindictive the company can be towards its perceived rivals and enemies. Although sparring over a billboard might seem somewhat mundane to many, Bezos’ commitment to legally challenging his opponents has much farther reaching effects elsewhere.

Most notably, his current attempts to sue NASA for its decision to partner with SpaceX on the upcoming Artemis lunar landing mission are already causing sizable delays in the journey’s original timeline.

Unclear how this will turn out — We’re no legal experts here, but it definitely seems like either side could potentially win out in the eyes of a judge. Macy’s claims its original lease with the Kaufman Organization indefinitely bars competitor businesses (read: Amazon) from renting the billboard. Amazon will undoubtedly find ways to counter this in court, but it will be up to the professionals to determine what will become of the massive ad space. We’re not diehard Macy’s fans over here, but obviously we’d take its branding over Amazon’s insignia in the heart of NYC any day.