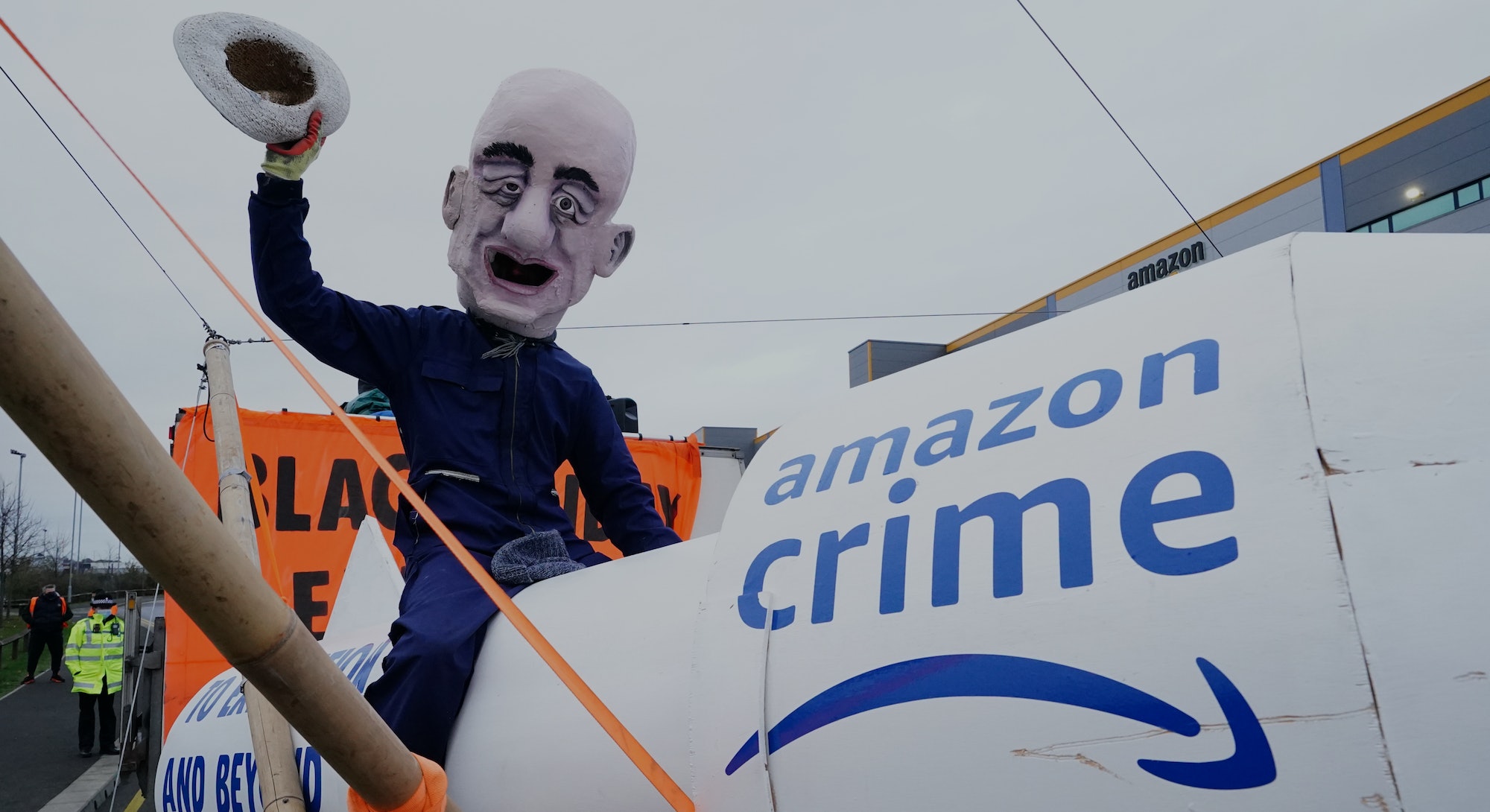 Last year, it was estimated that Amazon would account for 42 cents of every $1 spent during the holiday period.

Its Black Friday and Cyber Monday sales hit record highs in 2020, with $4.8 billion of goods sold over a single long weekend. That’s $50 million of merchandise moved every hour.

And now, it is once again the most wonderful time of the year for Amazon. The tech giant’s business is built, very successfully, on putting profit first. “Amazon does not have a great reputation when it comes to labor relations,” says Michelle Kaminski, associate professor in the School of Human Resources and Labor Relations at Michigan State University, with some understatement.

“They’re beholden, as a public company, to their shareholders and stakeholders,” says Delano Saporu, a financial analyst with New Street Advisors Group. “They’re looking to protect and increase market share for shareholders, and to solidify the market in their different business models.”

But what if it were different?

“You look at the gilded age of robber barons here in the United States, and I’m sure it was the same.”

The company, first established in Bellevue, Wash. in 1994, by Jeff Bezos, has become an irreplaceable part of our lives. According to an analysis by Tigress Financial Partners, Amazon’s online stores and third-party seller services arms account for more than 70 percent of its $110 billion dollar revenue in the last quarter. (Amazon Web Services, which offers hosting and cloud storage to businesses — itself not a green industry — accounts for 12 percent of Amazon revenue, while subscription services such as Prime are a further 7 percent.)

Amazon already has made some shifts toward being a “good” company. In May, it hiked wages for half a million of its fulfillment workers — at a cost of more than $1 billion. Though, for context, the company’s current market capitalization is $1.82 trillion. It also published its Climate Pledge, part of which involved using electric vehicles in its delivery chain, rather than relying on gas-guzzlers.

Whether that’s a meaningful change or a small concession to the trend in business of prioritizing environmental, social, and governance standards depends on your point of view.

“A lot of businesses like to claim that they've got a ‘purpose’ with a capital P,” says Stefan Stern, visiting professor at London’s Bayes Business School. “They talk quite a lot about it, and there has been this rhetorical shift in the past couple of years to talk more about stakeholders and not just shareholders,” he adds.

(Stakeholders are people who foresee an ability to change a company and its ethos, pushing the business toward the overall goal of change, even if it comes at the expense of diminished financial returns. Shareholders are focused on profit and little else.)

Will Brucher, a labor expert at Rutgers University, laughs when I explain the premise of this article. “I don’t think the corporate goals of Jeff Bezos and others are all that different to their 19th and 20th-century counterparts,” he says. “It’s not slavery per se, but the whole mantra of earning more and spending less. You look at the gilded age of robber barons here in the United States, and I’m sure it was the same.”

Every day, Brucher says, he drives past billboards on the New Jersey turnpike, near Amazon’s key Eastern Seaboard distribution centers, and marvels at the disparity between how the company presents itself and what some of its workers say about how they’re treated.

“The basic imperative of a company like Amazon is to grow, to accumulate as much revenue and make as much profit as possible,” he says. “They’ve based this off a business model of paying workers the least amount of money they can get away with, not being particularly generous with fringe benefits, and really trying to control every aspect of the work process, churning through workers who don’t meet their standards.”

However, other analysts believe Amazon’s shift is rooted in a genuine desire to be better, and that the idea of asking how it could become a good company — and how much it would cost — is little more than virtue signaling.

“The problem with sitting on a moral high horse [is] that you fall off,” Aswath Damodaran, professor of finance at the Stern School of Business at New York University, writes in an email in response to an interview request for this story. “This story is so absurdly skewed to begin with that responding to it will only make it worse.”

Damodaran seems to suggest that the premise of this piece is hypocritical. “Amazon pays its employees more, with wages and benefits, than the New York Times pays its employees (who are not star reporters), or Walmart pays its employees, and it treats them better (and definitely more than what Input magazine pays its journalists),” he writes. A representative for Input says the publication’s rates for part-time newswriters exceed Amazon’s average starting wage of $18 an hour.

The professor did point out that Amazon has created more than a million jobs in the U.S. in the last decade, and made “thousands of its investors into millionaires” — many of whom give to charity. “I thought that was a good thing, but my definition of good must be different from yours. (BTW, without Amazon’s enrichment of Jeff Bezos, I wonder where the Washington Post would be today…),” he writes. Bezos, who stepped down as Amazon’s CEO earlier this year, bought the Washington Post in 2013 for $250 million.

Bayes Business School’s Stern believes that part of Amazon’s change of heart has been driven by the pandemic, and the resultant pressures on its business and the need to fill holes in its workforce.

Stern can’t pinpoint a specific amount it’d cost Amazon to become a “good” company given its reach into most aspects of our lives, but Prem Sikka, professor of accounting at the University of Sheffield and a member of the U.K. House of Lords, does.

“There is never a cost associated with doing the decent thing and the right thing.”

“There is no cost to Amazon,” he explains. “There is never a cost associated with doing the decent thing and the right thing. If anything, Amazon would gain that huge amount of positive publicity and public respect, which will be good for [Bezos’] business in the long run.” (It may not come as a surprise to learn Sikka was made a lord by the U.K.’s left-wing Labour Party.)

Yet Sikka believes Amazon’s unwillingness to change its business model isn’t because of a fear that it would be overtaken by less noble competitors — as the dominant player in the industry, it would likely set standards others felt compelled to follow — but is instead down to a fundamentally different business outlook.

“I think it is generally just taking a very narrow view of the role of business and society,” he says. “They’re just looking at in terms of how the shareholders gain in the short run.” Executives too are driven by performance-related pay boosts, rather than the long-term benefit to the planet. “Inevitably, that encourages that kind of behavior, which is: ‘Pay low wages, you can improve your profits; you do better tax dodging, that improves the profits.’”

Saporu agrees: Accountability to shareholders is likely why Amazon is loath to grow too strong a conscience. “That’s probably why you’re not seeing companies make a drastic change in their business strategy to do any of those things,” he says. (Amazon did not respond to a request for comment for this story.)

Damodaran believes no such change is necessary. “I am not sure what you mean [by] ‘completely beneficent’ and ‘positive,’ and I see that you throw in ‘non-harmful’,” he writes in response to my preliminary request. “What is this harm that you see Amazon doing? It must be... those deliveries of goods and services overnight to millions of Americans who need them. Terrible thing to do.”

The NYU Stern business professor also questions any potential harm from the use of cardboard boxes to deliver Amazon packages. “I wonder what the environmental damage would be of each of us getting in our cars and driving to the local mall, waiting for a parking spot, and walking out with packages from stores?” he asks. “I guess they could offer all their products and services for free, until they go bankrupt.”

Of course, given Amazon made $50 million every hour during Thanksgiving 2020 — and online retail has only grown bigger and more important — that seems unlikely. “They’re making all kinds of money, and they are not sharing that money with the people who helped them make it,” says Kaminski. “They’re not sharing it with their workforce.”