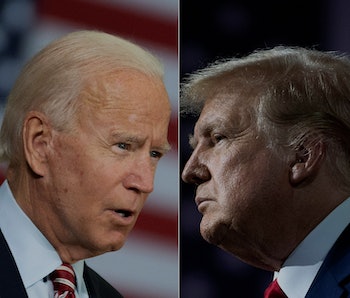 With 36 days until the presidential election, Joe Biden's campaign says that Facebook has failed to reign in President Trump over posts that mislead the public about mail-in voting and other issues. Trump has repeatedly questioned the credibility of voting by mail, including most recently by saying that ballots already being returned cannot be accurately counted.

Biden's campaign manager Jen O'Malley Dillon sent a three-page letter to Facebook CEO Mark Zuckerberg, in which she says that misinformation has gotten worse since the social network promised to clamp down. "We were told that Facebook was working to determine how best to apply its new, more aggressive approach. Three weeks have now passed. Rather than seeing progress, we have seen regression."

It's not enough — Facebook has taken some steps to support the election, including labeling Trump's posts with fact-checks that contradict the president. It's also directing users to information on how they can vote. But the company has repeatedly had to update its labels to more forcefully push back against Trump. And it's hard to say how effective such labels are anyway in changing the views of Trump's supporters considering he has discredited tech companies in their eyes as being liberally biased.

The Biden campaign letter says that it will be calling out Facebook's failures "as they occur over the coming 36 days."

Experts overwhelmingly say that the mail-in ballots are safe from fraud, and the FBI recently released a statement stating it's found no evidence of coordinated attempts to manipulate the ballots. Some worry that Trump's claims are intended to throw uncertainty into the results of the election so he can challenge them in court and delay a transfer of power. He has repeatedly declined to say whether or not he will respect the outcome of the election should he lose.

There's no backbone — Democrats haven't trusted Facebook since the 2016 election, when Trump's campaign spent aggressively on ad campaigns to discourage black Americans from voting. It did that using targeting information collected through unauthorized access to Facebook user data. Russia-based coordinated groups were also able to grow large audiences on Facebook and spread sensational posts about Hillary Clinton making wild claims, like that she was part of an elaborate child sex trafficking ring based out of a pizza parlor.

Facebook has said such methods wouldn't be possible in the 2020 election, but it also has trod carefully in censoring any content from politicians for fear of being attacked by Republicans. Conservative pages consistently track as the most popular sources of content on Facebook, and the site creates an echo chamber by suggesting similar pages to people already consuming right-leaning content. Facebook's users tend to skew older and disproportionately share misinformation. Even when Facebook does remove false content, the content has often been shared widely before action is taken.

It's an unprecented difference over yesteryear when broadcast and print outlets reported the news and kept each other in check through traditional reporting. Nowadays, users on Facebook can choose to just follow partisan accounts run by anyone.

There's currently a new conspiracy theory circulating on Facebook that claims Biden will use a secret earpiece to be fed answers during tonight's debates. The campaign has denied the claim made by one anonymous source but the posts are spreading without fact-checks.

Facebook has little incentive to act considering the company is doing better than ever. And if Trump is reelected, doing nothing will pay off.