“Left standing, [the Texas law] will turn the First Amendment on its head — to violate free speech, the government need only claim to be ‘protecting’ it.” 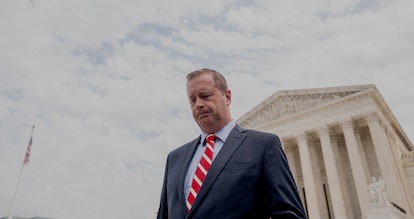 Last week, a federal appeals court ruled that a new Texas law set to punish tech companies for acting upon any sort of “anti-conservative” bias could continue through the legal system. Now two Big Tech lobbying groups are pleading with the Supreme Court to block the law before it can progress any further.

The Computer & Communications Industry Association (CCIA) and NetChoice filed an emergency application to the Supreme Court last Friday, May 13, claiming the new law would cause “irreparable harm” to both the world wide web and the companies that run it. Those two groups together represent a significant portion of the tech sector, including companies like Amazon, Apple, Facebook, Google, Twitter, and TikTok.

“Left standing, (the law) will turn the First Amendment on its head — to violate free speech, the government need only claim to be ‘protecting’ it,” said NetChoice lawyer Chris Marchese.

About that law — The Texas law in question has not been unilaterally supported by the judicial system. Originally it was blocked by a federal district judge before an appeals court justice granted it a temporary injunction.

This conversation has been brought back to the forefront of social media discourse as of late in relation to Elon Musk’s attempted Twitter takeover. Musk is all for “free speech,” even going as far as to say no one should ever be banned for speaking their mind.

Not the last — The discourse around this supposed anti-conservative bias has lost its center. Proponents of laws like this new one from Texas say moderation is a violation of the First Amendment — but the tenets of free speech include allowing individual entities to make their own calls in these affairs.

“While views may differ on whether online platforms should host viewpoints like hate speech or Nazi propaganda, the First Amendment leaves that choice to private citizens and businesses, not bureaucrats,” said CCIA president Matthew Schruers.

Other, similar bills have taken aim at social media companies’ ability to moderate their own platforms, though none has managed to get quite so far as this one. It’s all too likely this won’t be the last bill of this sort, either.