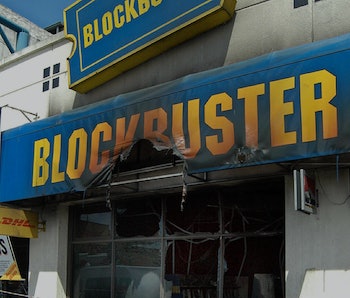 We’re edging dangerously close to a time when Blockbuster nostalgia becomes as obsolete as, well, VHS tapes. Considering the iconic brick-and-mortar video rental chain apexed back in 2004 and only supports one actual remaining store today, Gen Z and their cultural heirs to the throne in Gen Alpha (look it up) will have an increasingly hard time relating to the pinnacle of ‘90s and early-2000s home entertainment. Perhaps that’s one of the reasons why a group of crypto bros are hoping to buy out Blockbuster’s current owners at Dish Network using a decentralized autonomous organization (DAO) to raise the funds.

Citing a mission to “liberate” Blockbuster’s good name and turn it into “the first-ever DeFilm streaming platform and a mainstay of both the Web3 brands and products,” the BlockbusterDAO is currently looking for backers to chip in towards a goal of $5 million. All one needs to do is purchase some newly minted Blockbuster DAO NFTs at 0.13ETH each... which don’t exist just yet, nor does an official website, although the BlockbusterDAO Discord promises both will come in the near future.

I wish them the best, seeing as a similar project to buy the U.S. Constitution worked out so well last month.

From obsoletion to the Oscars — In a lengthy Twitter thread, the minds behind BlockbusterDAO laid out their plans and reasoning behind attempting to wrest the brand from its current owners. In short (very short), Blockbuster’s resilient nostalgia coupled with its potentially dirt cheap price point could easily lend itself to an example of an actually successful, notable DAO project that, in their words, might even “revolutionize the creative decision-making and financing of the film and television industries forever.”

Should BlockbusterDAO actually nab the original business, its organizers imagine a near future that includes collectively decided IP decisions and purchases that would contribute to a new vault of original Blockbuster films and series akin to other streaming services. “There’s A LOT of directions this could go on the consumer side,” admits the organizers, including “film derivatives, relisting of IP for public/private sale, and/or some sort of reward program for collecting consumer data.” There’s also mention of Oscars and $1 billion annual revenue, too.

All this, of course, would all take place on the much-buzzed-about-but-still-up-in-the-air-literally-and-figuratively Web3, so take that as you will.

Just ridiculous enough to work — And yet... why do I feel like this could somehow work? I’m not endorsing the plan in any way, but if some crypto bros can manage to raise $47 million for a copy of the Constitution, then it’s easy to see ‘90s nostalgia netting $5 million in no time. If Dish Network then accepted the offer (that’s a very big “if,” of course, seeing as how it’s well aware of the name recognition), well... there you’d have it. Blockbuster would be owned by a DAO.

Who the hell knows, is what I’m trying to say here. 2021 was weird enough for cryptocurrency meme economics; let’s see what 2022 has to offer.