Elon Musk loses it over coronavirus: 'This is fascist ... what the f**k?'

“[T]his is fascist. This is not democratic, this is not freedom.” 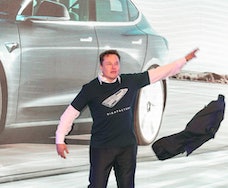 If investors, the general public, or anyone else for that matter needed further proof that Elon Musk is coming unhinged, they got it today when the Tesla CEO launched into a tirade during an earnings call. Musk didn’t hold back on what he thinks about the coronavirus-motivated lockdowns in California and the wider U.S.

Musk didn’t want to close Tesla down in the first place — Protocol reports the comments came in reply to question about California’s shelter-in-place orders that forced Tesla — along with thousands of other businesses — to shut their doors in efforts to combat the spread of COVID-19. Musk initially tried to fight the shutdown, but was ultimately forced to comply.

"So, the extension of the shelter-in-place, and frankly I would call it forcibly imprisoning people in their homes against all their constitutional rights — my opinion — and erasing people's freedoms in ways that are horrible and wrong, and not why people came to America or built this country. What the fuck? Excuse me."

Suppliers are suffering — Musk warned that while Tesla will be able to “weather the storm,” many smaller enterprises are unlikely to. He said many of Tesla’s suppliers are “having a super hard time.” You know what constitutes a “hard time?” More Americans — 50,000 at time of writing — dying from the coronavirus than died in the Vietnam War. A dip in one’s stocks, meanwhile, doesn’t cut it. And it’s certainly not worth risking workers’ lives over, nor those of their families.

Earlier this week, in a disturbing echo of Trump’s “Liberate” series of tweets, Musk tweeted “FREE AMERICA NOW” and has been vocal in his support of a decision taken in Texas to begin reopening businesses there. For extra douche points, Tesla's also laid off many of its most vulnerable employees.

Misplaced rage and a tenuous grasp of the facts surrounding the severity of the coronavirus pandemic — or what constitutes a ventilator — aside, Musk’s position is a reckless one, likely to embolden other lunatics of the sort seen protesting in Virginia and Minnesota, and egged on by the self-appointed chairman of the unstable genius committee, the commander-in-chief.

Even in Musk’s ignominious history of bad looks, this one is uniquely horrifying.