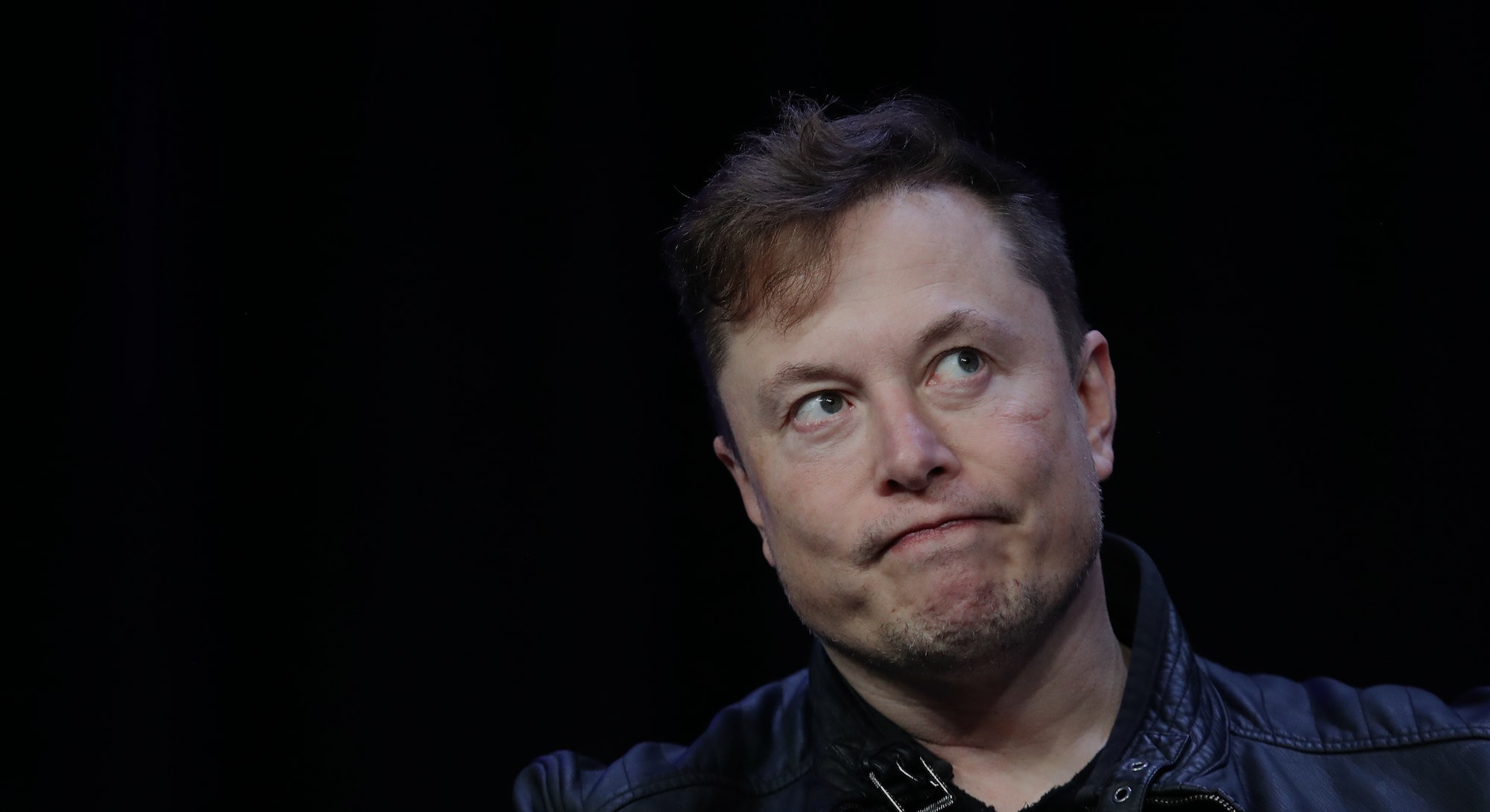 Elon Musk is a billionaire. An inventor. An entrepreneurial genius. The first person to ever make a mass-market electric vehicle viable. A visionary who will take us to Mars.

He's also behaving like a lumbering idiot who can’t seem to understand basic ideas about public safety, health, how viruses work, or when to keep his mouth shut.

In the early hours of Wednesday, the car genius tweeted the Trumpian “FREE AMERICA NOW” — a kind of love letter to the president’s “LIBERATE” messages that clogged up the collective consciousness a week ago. These tweets seemingly want to represent a radical idea to the viewer: America has had its freedom taken from it during the coronavirus lockdowns, and it must be restored. By force? Maybe! The messages certainly read like a call to arms. A Trump-supporter responded to Musk that, “The scariest thing about this pandemic is not the virus itself, it’s seeing American so easily bow down & give up their blood bought freedom to corrupt politicians who promise them safety.” Musk’s response? “True.”

Here’s what’s actually true: 54,362 American lives have been lost (so far!) due to COVID-19 — more than U.S. lives lost in the Vietnam war. The U.S. leads the world in coronavirus cases (a number that continues to grow), but is woefully behind in testing, protective equipment for medical workers, and has no formal reopening plan. Here’s what else is true: the people most at risk for infection and death due to this virus aren’t rich, middle-aged businessmen.

Elon Musk, on the other hand, is a rich, middle-aged factory owner who wants his production lines back at full capacity so he can continue to make a buck on his electric cars (disclosure, I lease a Tesla Model 3, a decision I increasingly question with every Musk quote). His tweets aren’t about American freedom. They aren’t about people’s rights. They are about his desire to profit during a global pandemic.

In fact, on an earnings call today, Musk went on a tirade over COVID-19 shelter-in-place orders, calling the practice 'fascist,' and ultimately becoming apoplectic about its impact to Tesla suppliers, saying they're having a "super hard time." The tens of thousands of deaths were not mentioned.

This has been an ongoing campaign from Musk. First (like Trump) he downplayed the “panic” caused by COVID-19. Then he played armchair scientist, musing that hydroxychloroquine would be effective treatment for the virus (it’s not — in fact it might be killing people). In the eleventh hour, he suggested he might help front-line medical workers by providing ventilators to hospitals. Then he never sent any. Then he lied about it (on Twitter, of course).

All of this, like so much of Musk’s bluster, was self-service. Playing genius, or hero, or smartest-guy-in-the-room, and finally, trying to foment anger so he can get something he is after. Unlike Musk's "pedo guy" incident, this isn't even about wanting to seem cool. It's so obviously, pitifully about business, and the CEO's past actions — whether it's trying to skirt shelter-in-place restrictions or failing to support workers at Tesla — tell the whole story. It is craven, short-sighted, and inhumane. His followers, a legion of reply-guys and gals, may think he is onto something. They may believe in Musk’s distortion field enough to prostrate themselves before him, or to be outright crucified in service to him.

Everyone else should recognize his behavior for what it is — a childlike impulse control problem married to simple, old-fashioned greed. Sound familiar? If we can learn anything from Musk and Trump in this moment, it’s that bombast and grandstanding can’t take the place of real intelligence, and don’t save lives or offer answers. For the state we’re in right now, real, stable geniuses are actually needed.

Note: This post has been updated to include Musk's comments on a Tesla earnings call today.