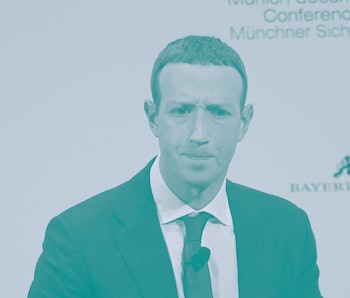 Facebook has been using just about every underhanded technique in its power to secure its advertising revenue, according to a new report by the Financial Times. That includes everything from birthday cakes to ski trips to exclusive dinners at the home of chief operating officer Sheryl Sandberg.

The exclusive clubs of advertisers, known internally as “client counsels,” are invite-only. Facebook uses these counsels to build and maintain relationships with its most important advertisers. The close bonds formed in these inner circles has allowed Facebook to continue growing its advertising empire while also mitigating scandals like the Cambridge Analytica data leak.

It’s no secret that Facebook has been struggling to keep some of its top-paying advertisers on its platforms as the #StopHateForProfit campaign continues to gain momentum.

But Facebook seems mostly unbothered by large corporations denouncing its policies. The company’s response has wavered between denial, empty promises, and stark refusal to change — but never has the company been worried about those advertisers leaving. In fact, Mark Zuckerberg has gone as far as to say the company’s reputation is more important than that revenue.

Now we know why Facebook is so unbothered. Its most important advertisers are still in the company’s back pocket — thanks to some truly sketchy loyalty-grabbing techniques.

The Facebook Playbook — According to FT, the main person behind the loyalty counsels is Carolyn Everson, Facebook’s vice president of global marketing solutions. Everson is also the one who’s been heading Facebook’s panic response to the ongoing ad boycott.

Several marketers said that Everson and her colleagues have what they call a “Facebook playbook” in responding to a crisis that could impact advertisers. That playbook includes exclusive emergency meetings and phone calls to appease concerned advertisers.

The crisis-mitigation technique also includes ensuring advertisers want to keep their seats at the exclusive tables offered by these client counsels. Facebook shares insider information with these advertisers — under the auspices of a non-disclosure agreement, of course — as an encouragement to stay on Facebook’s good side. The source of this information called the group a “controlling mechanism” for “manipulating people to…look over obvious issues.”

Bullying — Facebook is not as slick as it thinks it is when it comes to its questionable loyalty incentives. An adviser from one advertising agency told FT: “Sometimes there’s a bullying aspect to it.” The same adviser said, “You’re being treated well, you’re getting taken out to dinner… but you’ll get grief if you speak out.”

In convincing advertisers to stay with the company, Facebook has also tried other strategies, such as compiling a table comparing its own policies to those of other major social media companies. “It was definitely Facebook’s strategy to drag in the other platforms,” said one agency executive.

Facebook denies it, of course — Everson declined to comment on the story for FT. A Facebook spokesperson said: “Any suggestion that we silence our partners is categorically wrong when in fact the opposite is true.” They added that Facebook’s teams have “a long history of working with the industry” and that the company works “to encourage candid feedback.”

On her own Facebook account, Everson wrote an emotional post where she said the last month has been “the hardest stretch of my professional career, with endless days, sleepless nights and more than a few tears.”

The end result of the current ad boycott remains to be seen. Facebook is still putting on its best unbothered face for the public — likely because the company has been cultivating loyalty from top advertisers for years. So far it’s looking unlikely that Facebook will bow to the boycott’s pressure.