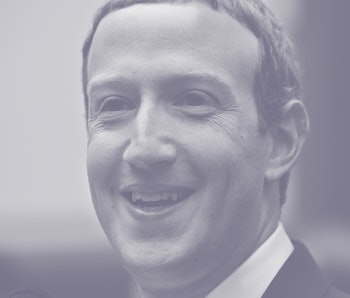 The coronavirus has, at least for the time being, reshaped our world's economy. Millions of people have been forced to work remotely as their companies come to terms with a rapidly changing and unmistakably volatile global landscape. The virus has also sharply laid bare the vicious chasm between corporate higher-ups and employees.

Facebook is no exception. In an interview with The Verge, Mark Zuckerberg detailed his social network's response to COVID19. According to Zuckerberg, Facebook may consider pushing half of its workforce into remote positions — and start axing pay for some employees. As millions of workers in the United States and around the world grapple with reduced pay as well as devastating job terminations, Zuckerberg — who seems to enjoy cosplaying as a philanthropist when it suits him — has only added insult to injury with these comments.

"But I think that it’s possible that over the next five to 10 years — maybe closer to 10 than five, but somewhere in that range — I think we could get to about half of the company working remotely permanently," he added.

Now, about your paycheck — A major caveat applies here, and likely takes away the convenience of working from home. As CNBC noted, Zuckerberg has also stated elsewhere that Facebook will "adjust salary to your location at that point" while adding that there will be "severe ramifications for people who are not honest about this."

The CEO noted that Facebook will "aggressively" increase its calls for remote workers while applying a "measured" strategy as far as reopening in-person sites goes. This "adjustment" means that if a worker moves to another place where the cost of living is lower than that of the Bay Area, this will likely reflect in their salary. For those who want to permanently relocate to a remote position, they will have to keep Facebook in the loop in order to reflect their taxes, among other details.

Unsurprisingly, Zuckerberg's comments reflect a callous nonchalance toward the extreme precarity and uncertainty workers, including Facebook employees, face due to the COVID19 outbreak. It sounds like a long-term compensation plan, as Bloomberg Opinion columnist Conor Sen pointed out, and will likely affect thousands of workers in the United States and abroad.

It's not great for Zuck, either — Zuckerberg, for his own part, doesn't sound so happy about the likelihood of employees asking for permanent remote positions (which is bound to happen due to a pandemic). "This is too important of a thing to just say everyone can go do this," he explained to The Verge, "and then kind of figure it out along the way."

These are logistical concerns that seem understandable from a professional point of view. But when you consider Zuckerberg's financial power and Facebook's worth, the CEO's comments about remote work and tweaking salaries sound exploitative and inconsiderate. Given the grim hell that Facebook workers go through, pay bumps — not cuts — make a lot more sense.