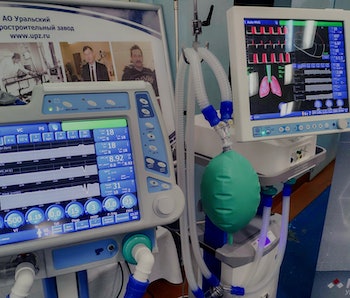 Ford announced Tuesday that it will repurpose its factories to help create medical devices needed in fighting the growing coronavirus pandemic. The auto giant will specifically work with 3M to produce respirators and GE to build ventilators, and utilize its own 3D-printing capabilities to make face masks. The auto giant, along with GM, Fiat-Chrysler, and Tesla, shut down its factories last week in order to help slow the spread of COVID-19.

"It is a time for action and cooperation," said Ford Chairman Bill Ford. "By coming together across multiple industries, we can make a real difference for people in need and for those on the front lines of this crisis." Ford previously repurposed its factories in 1942 to build vehicles for the U.S. military during World War II.

Car companies can make medical devices? — You may be thinking to yourself that medical devices are completely different products from Ford trucks, so how is the company able to pivot to making them so quickly? Ford says that respirators and ventilators can actually be built using existing off-the-shelf hardware from itself and its partners. For instance, the fans used in a Ford 150's cooled seats can be used for airflow in a respirator. Throw in one of 3M's HEPA air filters and you've got yourself a respirator. Respirators are mask-like devices that filter and provide clean air, and can be used by medical professionals to ensure they're not breathing in air contaminated by virus particles.

On the ventilator front, Ford is working with GE Healthcare to expand production of a simplified version of its existing ventilator design. Ventilators help patients breath by pumping oxygen into the lungs; coronavirus can cause inflammation in the lungs that makes it difficult to breathe.

Government agencies have for years warned of shortages in available ventilators should a major pandemic arise. The privatized healthcare system of the United States locks out those without means and simply isn't prepared for a sudden influx in new patients.

Tesla is helping too, kinda — Elon Musk, in classic Musk fashion, came out on Twitter last week saying that his company could help produce ventilators. Tesla was forced to reluctantly close its Fremont factory shortly thereafter, so certainly it should have some available resources. New York Mayor Bill DeBlasio responded with interest as his city faces a rapidly increasing number of cases, to which Musk said his team would be in touch.

Instead of making them using his own factories, however, we learned today that Tesla just bought 1,200 ventilators from China.

It's a welcome gesture but also a reminder that Musk has a lot of money and buying up some ventilators should be a rounding error for him. Certainly, it's better than the whole Thai soccer team fiasco, at least, and helps wash his reputation a bit of comments he made on Twitter last week, in which he said: the "danger of panic far exceeds danger of corona imo." The global death toll from the virus now stands at 14,000 with over 300,000 reported cases, though this number is expected to be far higher because testing is limited.