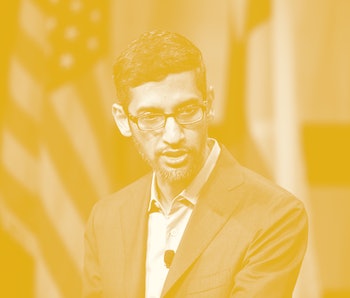 Google announced in a blog post on Wednesday it intends to improve the number of candidates from underrepresented groups within the company at senior levels. It's promised to increase management diversity to 30 percent in the next five years and has also announced a new $175 million commitment to fund Black businesses and startups. The post was also emailed to the entire company by CEO Sundar Pichai.

“As a company, and as individuals who came here to build helpful products for everyone, Google commits to translating the energy of this moment into lasting, meaningful change,” Pichai writes in the post.

The post is makes all the right noises. It's both a promise to make Google — and the world — a better place, and a gameplan for how to deliver on that promise. Pichai's memo is detailed and speaks to the company’s responsibility to continue diversity programs across its properties and the world as a whole.

We have, however, heard rumblings recently of Google doing quite the opposite. Just last month, allegations surfaced suggesting the company has been pulling back on its diversity programs to appease conservatives. Like Apple, Google is saying the right things, but we'll have to wait to see if that translates into measurable outcomes.

The plan — Most of Google’s blog post is dedicated to the concrete steps it plans to take to increase diversity at the company.

Google’s first commitment is ensuring 30 percent of leadership roles are filled by people from underrepresented groups by 2025. In order to achieve this goal, it will increase investments in places like Atlanta, Washington DC, Chicago, and London. What's pleasing about this promise is how easy it is to quantify and assess down the line.

Diversity will also become a higher priority at lower levels across the company. Pichai says he’s establishing a task force including senior members of the Black community at Google to develop recommendations for accountability across recruiting, hiring, performance management, and career progression. That task force will report back within 90 days with specific proposals.

Google is also looking to increase programs that foster a sense of inclusivity for its Black community. The company wants all of its employees to feel included in all of its activities and policies. That sort of thing is, of course, harder to measure.

Anti-racism educational programs will receive more funding and priority from Google, the company says. That will include piloting training for all Google employees that explores systematic racism and racial consciousness. Which sounds like precisely the sort of program it previously phased out.

Lastly, Pichai says Google is working to expand its mental and physical health benefits to support the well-being of its Black community. The company’s Black Leadership Advisory Group will work with the Benefits team to figure out where benefits could be expanded to provide additional support.

Prioritizing Black ideas and opportunities — Google also plans to funnel more funding to products and programs that “help Black users in the moments that matter most.” Pichai says he put out a call for pitches a few weeks ago and has already seen more than 500 suggestions.

A special product task force will prioritize those ideas along with the Black Leadership Advisory Group and the Black Googler Network. Some have already been put into effect, like Google Assistant’s ability to speak about Black Lives Matter and an opt-in feature for Black-owned businesses to advertise that fact on their business profiles.

As part of this newfound prioritization effort, Google is earmarking $175 million for an “economic opportunity package” to support the Black community. Here’s the breakdown of where those funds will go:

Can Google actually pull it off? — Bold statements are all well and good, but we’ll need to see some receipts before giving Google too much praise here. We’ve seen some troubling reports in the past of Google’s bowing to political pressure to end some of its diversity training programs. Google has denied these claims outright, but employees say otherwise. Google will need to be extremely transparent in its diversity initiatives if it's to demonstrate a genuine commitment to change. That's a good thing.