Jack Ma is back and richer than ever 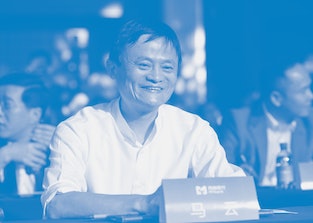 The addition to Ma's wealth on Wednesday alone

China’s second-richest man, Jack Ma, has remained largely hidden from public view for a few months now, including a notable absence from a scheduled appearance on a talent show. Rumors ran rampant... but any fears about anything untoward happening to him have largely been allayed.

Yesterday Ma made an online speech as part of a charity program run by the Alibaba Foundation, marking his first public appearance in the new year. In the video, he spoke to a group of 100 rural teachers who had received an award named after him and pledged to contribute more to rural development.

As one of the founders of Alibaba Group, the world’s largest e-commerce company, Ma is usually a fairly public person, appearing at events and in the media regularly, but he’s been laying low since the botched IPO of Ant Group, an Alibaba Group affiliate. Chinese financial regulators intervened in the anticipated initial public offering, and almost immediately thereafter Ma disappeared from public view.

Ma’s sudden reappearance yesterday sent his related stocks soaring. By the end of Wednesday’s market trading in Hong Kong, Ma had added a cool $1.96 billion to his already incredible fortune.

A reboot of sorts — Before yesterday, Ma’s last public appearance was on October 24, when he directly addressed Ant Group’s failed IPO. In that speech, he railed against Chinese regulators, who he saw as the main reason the $37 billion IPO never made it off the ground.

Very soon after, Ma faded from public view. His disappearance spurred a series of theories from industry experts and the media — had Ma been forced off the grid by the government, perhaps? Or had he simply decided to keep a low profile while the Ant Group ordeal blew over?

Now, with a few months of silence under his belt, Ma has taken to the digital stage with a much kinder, philanthropy-focused message. You have to hand it to him — the man knows how to rehab his image.

And the rich get richer — Jack Ma’s image isn’t the only thing that’s been changed by his reappearance — Alibaba Group’s stock rose by 6 percent on his first day back as the public face of the empire. Ma owns a 4.8 percent share in the company, which means he amassed approximately $1.96 billion in trading on Wednesday alone. That’s one powerful 50-second video.

Ma exited Alibaba’s board of directors in September 2019 and has since divested a fair number of the company’s shares he once owned. He’s still the second-richest man in China, though, and the 20th-richest in the world.

That fortune doesn’t come close to crushing those of Elon Musk and Jeff Bezos, but it’s definitely nothing to sneer at — especially since Ma, unlike many of his contemporaries, focuses much of his current initiatives on philanthropy.