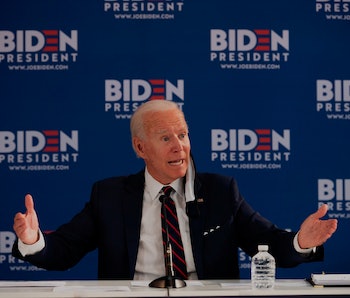 Joe Biden wants Facebook to take a stand on what sort of content it'll allow on its platform. In a petition launched on Thursday, the Biden campaign called for four policy changes to address information accuracy issues. Facebook has already responded to the petition and made it clear neither politicians nor the tech sector have what it takes to fix the hellscape that is Facebook and its many problems.

What Facebook says — Facebook issued a swift response to Biden's campaign, placing an emphasis on elected representatives to create guidelines on what social networks can and cannot do. Specifically, the company stated:

Just as they have done with broadcast networks — where the US government prohibits rejecting politicians’ campaign ads — the people’s elected representatives should set the rules, and we will follow them. There is an election coming in November and we will protect political speech, even when we strongly disagree with it.

Here's the problem — Despite Facebook's very own policies that tackle election-based fraud and fake news alongside voter suppression, critics worry that Zuckerberg's network does not have a robust enforcement policy in place. They especially take issue with the Facebook CEO's lukewarm attitude toward incendiary and controversial rhetoric from Trump himself (and other groups as well).

And while the company's imploring of elected officials to set ground rules sounds somewhat reasonable —public figures have an ethical role in these matters — Facebook failed to mention that as a private company, it has the autonomy to moderate platform content. It is not, in case it wasn't clear, bound by the First Amendment. It's under no obligation to allow anyone to say anything. Posturing as if this is an elected official's problem is not only unfair, it's dishonest. But then, that's classic Facebook.