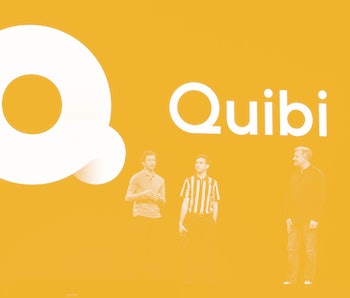 Quibi's death spiral continues. The "revolutionary" video-streaming service launched straight into a pandemic with ambitions to reach 7.4 million subscribers within a year. Instead, it's become the butt of industry jokes. Nobody is using Quibi, and co-founder Jeffrey Katzenberg is already making moves to try and sell... but unsurprisingly, finding a buyer is proving hard.

According to a report in The Information, big-pocketed companies including Apple, HBO, and Facebook have all been pitched on buying the company — which raised nearly $2 billion before launch — and all have passed. Katzenberg, a visionary in Hollywood and one of the founders of Dreamworks Pictures, even offered to stay on at Quibi following the acquisition to sweeten a potential deal. Nonetheless, no one is biting.

A tough sell — Quibi has burned more than $1 billion, but only has between 400,000 and 500,000 subscribers to show for it, a number that includes T-Mobile subscribers who get a one-year subscription for free. The company can't offer a catalog of content — it doesn't have exclusive rights to any of its content after a two-year period (part of how it wooed creators in the first place). And, on top of that, it's being sued over its "signature" Turnstile technology, which a well-funded company called Eko claims Quibi stole.

Netflix and other streaming services don't need Katzenberg's connections to get good content — market dominance and money are big enough drawcards. So it's hard to see what anyone would gain by buying Quibi.

If nobody buys the company, Quibi is now considering survival tactics, including repackaging its shows into full-length episodes and licensing them out to other streamers, which just about says it all. Nobody ever wants to watch just five minutes of a show they like, they want as much of it as they can get. And during a pandemic when nobody is "on the go," being restricted to watching from a mobile app is a joke.

A lesson in how to lose a fortune — Quibi threw around tons of money producing shows with stars like Chrissy Tiegen, and it planned to spend nearly $500 million on marketing in 2020. All before testing the waters and seeing whether or not the public would actually buy what it's selling.

The Information reports Quibi still has a massive $800 million left to figure out a turnaround strategy. Considering the company has exploited union loopholes in order to underpay production crews, we're not rooting for its success, though.