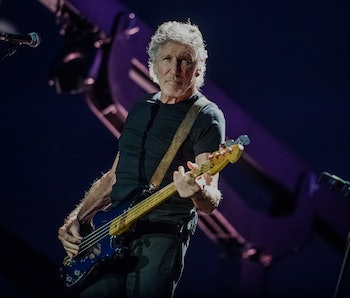 If you ever needed more proof that Mark Zuckerberg is totally the kind of guy that wears a band T-shirt without actually listening to their music, take a new allegation from Roger Waters: While speaking at a benefit late last week for jailed Wikileaks founder, Julian Assange (more on that below), the co-founder of Pink Floyd revealed he recently received a request from Facebook to license “Another Brick in the Wall (Part 2)” for advertising.

“You have no idea what it is — nobody does — because it arrived on the internet to me this morning. It's a request for the rights to use my song, 'Another Brick in the Wall (Part 2),' in the making of a film to promote Instagram,” Waters explained to a laughing audience. “So it's a missive from Mark Zuckerberg to me... with an offer of a huge, huge amount of money and the answer is, 'fuck you! No fucking way!”

Waters, citing Facebook’s predilection for aspiring to Bond villain-levels of world influence, went on to claim that it’s Zuckerberg and company’s goal to stifle privacy rights and free speech — the very things Waters and many others (for better or worse) see represented in public figures like Julian Assange.

Maybe Zuck would have had more success requesting the right to use “Money” instead.

Failing to read the writing on the wall — Regardless of your opinion of Julian Assange and Wikileaks’ various geopolitical fallouts over the years, it is a delicious bit of irony to learn of Facebook asking to use “Another Brick in the Wall” of all the damn songs out there in the world.

This is, after all, the Big Tech behemoth with one of the most notorious track records for invasive privacy policies, security breaches, and aiding the spread of dangerous misinformation. Zuckerberg loves to paint his empire as a great unifier — which, we suppose, is true in the sense of fostering a monolithic entity none of us can fully escape. Kudos to Waters and other artists for using what power they have for positive purposes.

As for Facebook — don’t worry, Zuck. There are plenty of other, far more appropriate songs out there to license. Here are a couple of our own suggestions: