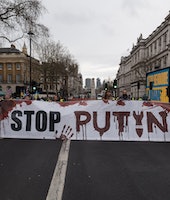 The number of Russian citizens estimated to use Instagram.

Russia made good on its threat from last week, and has banned Instagram for almost everyone residing in the country, effective today. The latest restriction on free speech, communication, and outside media comes as Putin’s government moves to punish Western companies for speaking out against the continuing crisis in Ukraine, targeting Meta in particular. On Friday, Instagram chief Adam Mosseri warned of the upcoming blacklisting via Twitter, expressing his dismay at the worsening geopolitical situation.

“This decision will cut 80 million in Russia off from one another, and from the rest of the world as ~80% of people in Russian follow an Instagram account outside their country. This is wrong,” he wrote. This now virtually completes a wholesale Russian ban on Meta’s social media products, with only WhatsApp still available for citizens. Over 80 percent of the nation also uses the messaging service.

Blocking the outside world — Between the Kremlin’s ongoing censorship campaigns and Western businesses’ boycotting the country, Russian citizens are now paying a heavy toll for Putin’s military incursion into Ukraine. The Ruble’s value has cratered over the last month as a new “Iron Curtain” is erected between Russia and the majority of the world, and it doesn’t appear that deescalation is in the cards anytime soon.

Getting creative about workarounds — Of course, it’s difficult to totally stop the flow of information in a country formerly used to having free access. Russian citizens will need to increasingly turn to stealthier options to circumvent crackdowns, and some tech companies are already more than happy to oblige. Twitter, for instance, has established an official .onion address that is supported via the Tor browser. Those interested simply need to download Tor, then head to https://twitter3e4tixl4xyajtrzo62zg5vztmjuricljdp2c5kshju4avyoid.onion to access the encrypted alternative. Thankfully, it’s a near certainty that more Big Tech companies will begin offering similar routes in the weeks ahead.