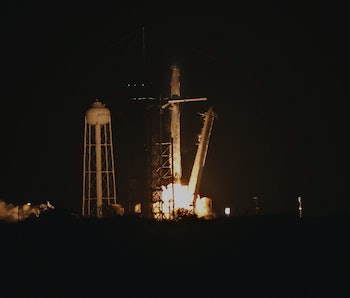 Much ado was made about the recent announcement of SpaceX’s partnership with the Canadian-based tech startup Geometric Energy Corporation (GEC) to launch a small satellite into space whose sole purpose will ostensibly be to shill products in low-Earth orbit. A surface read of that news easily conjures pretty obvious, Blade Runner-esque images of Coca-Cola and Tinder logos strewn across the night sky. Closer inspection, however, should calm amateur astronomers’ nerves... for a little while, at least.

As Futurism and other outlets have noted, the SpaceX / GEC joint venture isn’t intended to send up a massive billboard, but the exact opposite — a roughly 90-square centimeter, three-pound satellite known as a CubeSat which will include a pixelated side facing a camera attached to a selfie stick. Companies will be able to rent out pixels via... sigh... Dogecoin for images of their logos and artwork against a backdrop of the Earth.

This appears to be the potential culmination of Technoking Elon Musk’s announced intentions back in May to send Dogecoin into space with help from GEC, which all makes a certain amount of (admittedly inane) sense. So yeah, don’t worry about space billboards just yet, everyone. Although, rest assured, they are most definitely coming.

Ripe for sabotage — Still, there’s a chance (fingers crossed) this project might not actually ever come to fruition. Given the proposed setup, pretty much anyone could bid or purchase for visual space on the CubeSat. As GEC’s CEO, Samuel Reid, told Insider, “I’m trying to achieve something that can democratize access to space and allow for decentralized participation. Hopefully, people don’t waste money on something inappropriate, insulting or offensive.”

We hate to break it to you, Reid, but that is exactly what people are going to try to do. Especially the kind of people who own enough Dogecoin to buy space ads.

No escaping SpaceX’s orbit — Unfortunately, it doesn’t seem like SpaceX needs much help when it comes to billboards and advertisements. Everywhere you look these days, you see yet another headline involving billionaire space races, satellite internet access, and docu-ganda Netflix series promoting Musk’s long-term cosmic agendas of Martian conquest, as well as whatever the hell else he’s been inspired to do via a meme he happened across while stoned. SpaceX’s partnership with the Canadian startup is relatively small potatoes when you compare it to all that.