Legendary Staples Center to be renamed Crypto.com Arena. No, we're not joking. 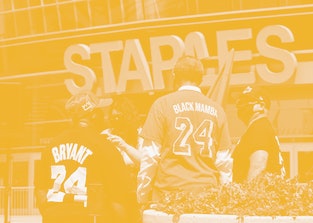 How much Crypto.com will pay over the next two decades to rename the venue.

NBA reporter Shams Charania broke a story last night that set basketball discourse ablaze: Staples Center, one of the most recognizable arenas in all of sports history, is set to be renamed. The new moniker? Crypto.com Arena.

We might shrug that off as a joke were it not coming from Charania, one of the most noteworthy figures in the access-driven, breaking news model that has come to dominate basketball media.

Staples Center (or soon-to-be Crypto.com Arena) is the home of the Lakers, Clippers, the NHL’s Kings, and the WNBA’s Sparks. Countless greats have graced the arena’s hardwood floors, like Kobe Bryant, Shaq, and Lisa Leslie, among others. Since opening in October 1999, Staples has witnessed five NBA championships, three WNBA championships, and two Stanley Cups. Memorials were held there for Bryant, Nipsey Hussle, and Micheal Jackson.

According to reports, Crypto.com will be shelling out $700 million over the next two decades to rename the venue. The change is set to take place this Christmas Day, when the Lakers will take on the Brooklyn Nets in a marquee matchup.

Crypto’s growing visibility — As we emerge from a world that has been devastated by a global pandemic and into a post-vaccine reality, one thing that has changed has been the ubiquity of digital currencies and assets. Founded in 2016, Crypto.com has been directing a huge chunk of whatever its advertising budget is towards the sports landscape. The platform has secured sponsorships with Formula 1, the UFC, and even purchased the Philadelphia 76ers’ jersey sponsorship patch.

The move feels incredibly hollow not only to basketball diehards but to even casual followers of the sport. Even though all major sports arenas are tagged with a corporate sponsor, the amount of history and real emotional experiences that take place in these spaces often imbue them with meaning. When someone mentions the words “Staples Center,” they don’t think about the office retailer, they think about a young Kobe Bryant scoring 81 points against the Toronto Raptors or Jack Nicholson flashing a shit-eating grin during a Laker playoff run. Or Lisa Leslie becoming the first WNBA player to dunk in a game.

It would be one thing if the arena just shifted hands to another massive company, but the fact that the new name is basically a URL adds a dystopic element to it.

"It's kind of like just stripping the history here by calling it something else," commented Paul George, a small-forward for the L.A. Clippers who grew up in Palmdale.