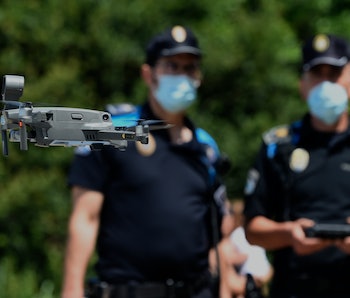 The U.S. Department of Defense’s Defense Innovation Unit (DIU) this week announced five new drones that have been tested and approved for official government use, the Wall Street Journal reports. Any drone manufacturer can pitch its wares to the U.S. government... as long as it doesn’t have any connection to China. A few years ago the government banned any of its affiliated entities from using some of the world’s most popular drones — those produced by China-based DJI — over security concerns.

Federal policies around which drones can be flown in what air space are fairly strict in the U.S. Californian company Zipline, for instance, needed to secure special allowances just to fly along a 32-mile delivery route to deliver emergency medical supplies. The Pentagon expects the new approvals will make it far easier for the military and other government agencies to purchase drones for official use.

Five flying spies for trying times — The DIU newly approved models have all been tested extensively (18 months’ worth of testing, at a total cost of more than $18 million) to ensure they won’t be sharing any government secrets. The newly sanctioned sky spies are:

According to The Verge, at least one of these companies — Skydio — has already sold some of its drones to the U.S. government. It’s very possible others on the list have already been in use by official offices, too, as the government is technically allowed to buy and use any drone manufactured on U.S. soil.

Get your rifle ready — While these five drone models are ostensibly for any and all government use, it’s really the military that stands to benefit from them. Make no mistake: these are war machines, even if they're taking pictures or videos rather than firing missiles.

“We are putting these tools in the hands of our warfighters in very critical times,” said Michael Kratsios, President Trump’s top tech advisor, “and we need to ensure that the technology in their hands is not only cutting edge but is also secure.”

So easy, anyone can fly them — Defense Department official Chris Bonzagni said these five drones are more portable and easier to use than the military’s current arsenal. Where drones are usually controlled by high-ranking officers with specialized training, this new set will allow more soldiers to work on drone programs.

The newly approved drones will be available via the government’s procurement website in early September. That means you have at least a few weeks to read up on hiding from drone surveillance before the new fleet rolls out.