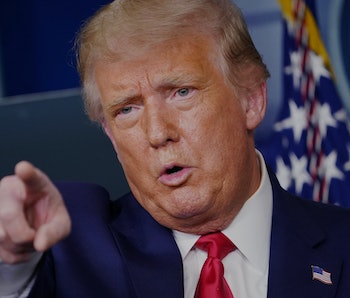 President Trump is doing everything in his power — and, some would say, extending beyond it, too — to force legislation around social media censorship. His latest effort involves nominating Nathan Simington, who reportedly helped draft the President’s executive order against Twitter, to the Federal Communications Commission (FCC).

Trump’s nomination was announced yesterday on the White House’s official website. Simington is currently a senior adviser at the National Telecommunications and Information Administration, where he specializes in network and telecom policy.

The appointment suggests Trump’s executive order wasn’t just a passing whim. Instead, he plans to follow this one through to its conclusion, even if that means using underhanded techniques to do so. It could mean the internet is about to change in substantial — and potentially deleterious — ways.

No more O’Rielly — Simington’s appointment is an effort to replace current FCC commissioner Mike O’Rielly, a Republican who has been vocally opposed to Trump’s executive order. He criticized the order for being created under misleading constitutional pretenses.

But…why? — It all comes down to perceived censorship. Trump and other conservative leaders are convinced that social media companies have a bias against conservative views. This has been repeatedly debunked, most recently in federal court. Conservative content dominates social media, particularly Facebook.

Trump’s executive order seeks to modify Section 230 of the Communications Decency Act, which has long protected internet companies from content posted by their users. CDA 230 is also what allows companies like Twitter and Facebook to set their own moderation rules.

The Republican party is taking every possible approach to ensure these protections are eroded. That’s included myriad legislative proposals, all of which seek to change the language of CDA 230 in small but powerful ways.

In order for Trump’s most direct action to work out, he’ll need support from at least three of the five FCC members. Business Insider notes that, right now, only one FCC member is definitely on Trump’s side. Two are Democrats who are publicly opposed to the order, and chairman Ajit Pai hasn’t made his opinion public yet.

O’Rielly’s replacement by Simington would put at least one more FCC member on Trump’s side. That still might not be enough to win the FCC’s approval and set the order in motion — but it’s a step in that direction.