Trump's Twitter knockoff stinks and no one is using it 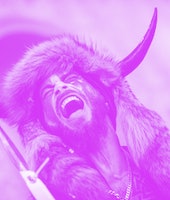 The drop in new weekly signups since Truth Social's launch in February.

Last we checked in on Trump’s Twitter alternative, Truth Social, it was royally screwing up its rollout and banning parody cow accounts. Personally, I’m still on the waitlist to officially create my account (be sure to eventually follow me @PatriotPartyBoy), which I find somewhat odd, since apparently nobody is using the dumb thing.

An exclusive from The Wrap published yesterday revealed that Truth Social’s new weekly user signups have cratered 93 percent since its February Presidents’ Day launch. While Truth Social is still currently drawing around 60,000 new downloads per week, it’s a far cry from the debut 872,000 downloads seen during the first seven days following its debut. In total, Stephanie Chan of analytics site Sensor Tower estimates 1.3 million users are still committed to proving some kind of oblique point by sticking with Truth.

And yet here I sit, patiently waiting for an email link to see what (little) chatter there is on the internet’s premiere social media app for people who think Gab and Parler aren’t bugshit enough. Sigh.

Trump stumped — For his part, Donald is reportedly extremely pissed off about the unequivocally awful first month-and-a-half of his social media project. “What the fuck is going on?” Trump reportedly could be heard recently grousing over the phone, according to a write-up from The Daily Beast.

It’s not the first satisfyingly bad rollout during his post-Presidency, either. Anyone remember his silly little blog attempt? Of course you don’t. No one does, which is why it’s already a digital carcass. Personally, I’m taking bets on how long people think until Truth Social goes out to Devin Nunes’ cow’s pasture. My money is on by summer’s end, although I’m open to being convinced otherwise.