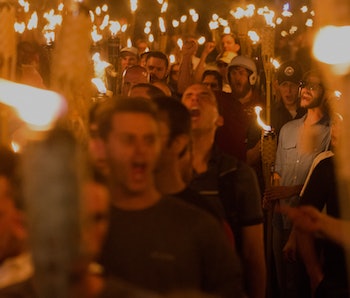 Winnie Heartstrong, a Republican candidate for Congress in Missouri’s 1st District, is using her blue-check-verified Twitter account to spread conspiracy theories about George Floyd’s death. Heartstrong claims Floyd actually died back in 2016 and the images we’ve been seeing of him since are convincing deepfakes.

The original tweet, which has since been deleted from Heartstrong’s account, invites users to visit a website about the theory, along with screenshots of a report she put together about the alleged deepfakes.

It’s no secret at this point that social media is home to plenty of fringe-right users who hope to use its massive, clickbait-prone audience to spread conspiracy theories and misinformation. While Heartstrong’s conspiracies are posted on Facebook, Instagram, and Twitter, it’s the last that’s most concerning because of her verified status, and because unlike the Zuckerberg empire, Twitter has promised to clamp down on deepfakes and misinformation.

Now it’s everywhere — Heartstrong has been posting her George Floyd theory across social media for a few weeks now without repercussions. Hundreds have commented, shared, and reacted on Facebook and Instagram.

Though her original tweet has since been deleted — whether by Heartstrong or by Twitter we’re not sure, though we’ve reached out to the company for comment — the theory persists across the network. A quick search turns up hundreds of tweets helping the theory proliferate.

The original tweet need not exist anymore because the damage has been done. Enough people believed Winnie Heartstrong’s theory that it’s taken on a life of its own. Her blue check likely played a role in helping that happen.

Bonus round: QAnon — Heartstrong has received much positive feedback from the far-right community across social media networks. Perhaps the most notable is the attention she’s received is a QAnon Madrid account, which praised Heartstrong’s "research" into the theory.

Heartstrong’s theories fit perfectly with QAnon politics: If you don’t agree with it, there must be some deeper conspiracy at play. QAnon and related conspiracies have real-life consequences that are often deadly.

Do better, Twitter — Twitter has taken no action against Heartstrong or the many other accounts peddling her conspiracy theories, and she's since created other, similarly outlandish, and potentially dangerous posts.

Twitter is taking some action against misinformation — action that has drawn brash criticism from President Trump and others in power. And yet the company continually fails to control the spread of conspiracy theories across its network. It's time it tried harder.