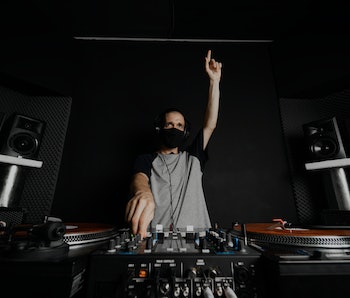 As the COVID-19 pandemic rages on, some app developers have attempted to promote public health safety with their own technology, such as this app that monitors cases. But other creators couldn't care less. That's how we got Vybe.

On Tuesday, multiple reports and tweets, including several tweets from New York Times reporter Taylor Lorenz, pointed to an app that promoted pandemic parties over public health risks. Dubbed Vybe, this app encourages users to "get your rebel" and "get your party on." A good deal of promotional content from Vybe has gone up on TikTok where millions of teenagers around the world post memes, dances, and fashion clips.

What Vybe has to say for itself — At the time of writing this report, Vybe's app was no longer visible in Apple or Google's marketplace, and its main website appears broken. It is unclear who exactly runs Vybe app's Instagram page but Vybe insists that the reports have been "blown out of proportion by the media." It says that the company does not "condone large gatherings."

If you didn't see a promotional video from Vybe, you would probably believe this — but Vybe's own clip on TikTok showed people congregating in closed spaces with enough alcohol and snacks to get a party started. The clip has since been removed by TikTok for violating community rules.

At the moment, according to Lorenz, Vybe has been "promoting secret NYE ragers in New York City." This is especially puzzling considering the fact that city authorities are already struggling to keep public activity controlled in the middle of a pandemic. COVID-19 transmission rates are so vexing and threatening that the famous Time Square NYE ball will take place virtually for many, as in-person spectators are not allowed for the first time since 1907.

Look, it is more than understandable to feel bored, restless, and lonely right now with increased physical distancing. Without a doubt, it takes a toll on one's physical and mental health. I personally can empathize having lived alone for months during the pandemic. But there are ways to socialize with your friends that don't involve risking your or their health at crowded "speakeasies, jam sessions, or beer pong" gatherings as Vybe would suggest. Hang out safely in a park, maybe doodle with them on skribbl.io, have a Zoom hangout, write to or call them. You don't need to do away with socialization; that's not the point at all. Safety is the point. So, get creative — not reckless — with it.