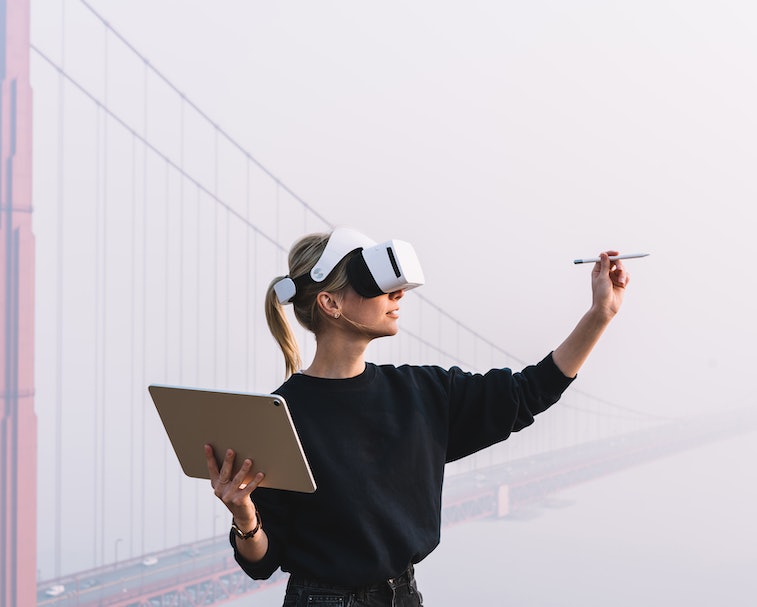 Virtual reality (VR) hasn't taken off in the way early proponents expected it would. But the combination of cheaper hardware, more approachable software, and the sudden abundance of time most people are spending stuck at home and in this world all mean VR's hitting its stride, and artists, architects, and event organizers are leaning into it hard.

As part of Dezeen’s Virtual Design Festival which kicked off in mid-April, several architects discussed the ways they were utilizing virtual reality. Architects Sarah Izod, Talenia Phua Gajardo, and Arthur Mamou-Mani, along with others from Space Popular, talked about how VR is changing festivals, socializing, and art installations, and some of the results are remarkable.

The art world — Izod, who straddles the line between artist and architect, is already inundated with clients wanting virtual experiences — particularly for new products. Deeper in the art realm, virtual galleries and art fairs are popping up from the likes of international gallerists Hauser & Wirth. Phua Gajardo, a Dezeen Awards judge and founder of the Asian art digital marketplace The Artling, said the environment improves online shopping because it gives buyers a better sense of scale.

Space Popular — Space Popular’s virtual settings were made with Mozilla Hubs, so they’re fairly simple in design and can be accessed without a VR headset. In recent days, the London-based studio has released several virtual environments.

They created El Laberinto de Pikachu y Badtz-Maru which is a kid-friendly maze, partially made for Fredrik Hellberg’s niece who was stuck inside in Spain for her birthday. AA Earth Gallery serves as a showcase for the Architectural Association school while unit meetings and general socializing take place in virtual space SquAAre. Hellberg and his co-founder Lara Lesmes have become particularly fond of the social aspect of VR.

"I think we probably both met more new people during the lockdown than we normally would,” Hellberg told Dezeen. "Normally, it'd be really difficult to get people to find a time when everyone can meet up but a lot of people have time to do meet ups in VR."

Space Popular is no stranger to VR and is probably best known for The Venn Room, a virtual concept where two rooms overlap in the environment. If two friends were hanging out, they would need to rearrange their furniture to fit the other’s home.

A 2D rendering of The Venn Room.

Virtual Burning Man — Mamou-Mani, meanwhile, has created impressive structures for Burning Man in the past and was slated to construct an amphitheater this August. Following the festival’s cancellation, he’s enlisted the help of game designers to make a virtual version. They invited him to virtual Burning Man settings created in AltSpaceVR and the more familiar Second Life.

“It was so surreal because I never really had a virtual site meeting. All the constraints, the physics of things falling down, you don't really have to think about that," Mamou-Mani told Dezeen. “You just suddenly feel space in a different way.”

A few years ago, it seemed VR was destined to fail, or at least remain extremely niche. Now, as examples like this remind us, it feels instead like VR's iPhone moment is coming.