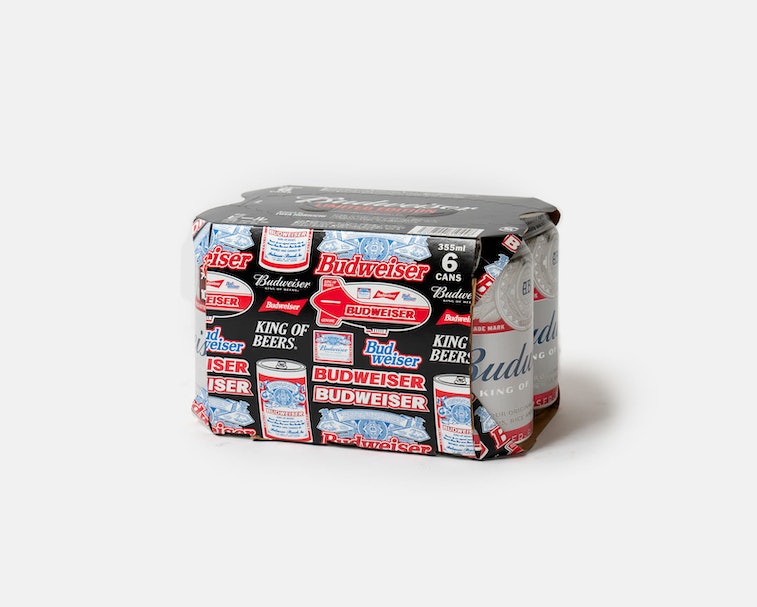 Budweiser, which has never been shy about merchandising its logo in streetwear and beyond, has launched an eye-catching campaign for merch exclusive to Japan. The "Be a King" campaign is giving out apparel featuring graphics from Japanese artists Kosuke Kawamura and Toya Horiuchi as part of nationwide raffle.

For a chance at winning, customers must snag a QR code from the collectible beer packaging available in supermarkets and convenience stores. Just over 1,000 pieces will be given away, making for a collection that's as rare as it is visually striking.

What's good? — Both artists designed a T-shirt and bandana that are limited to 335 pieces each — with the exception of Kawamura's 3D glasses-inspired tee, of which only 150 have been made. Kawamura's bandana has a similar graphic that offers a retro-futuristic take on the iconic logo. The graphic designer frequently lends his work to Japanese fashion, including a Dragon Ball capsule last year with Uniqlo UT.

Horiuchi, who's now in New York City as part of LQQK Studio, went with a more head-on approach to the past. His collage bandana combines several old Budweiser logos with a classic can and vintage blimp. The T-shirt keeps it simpler with the can on the front and a broken-up logo on the rear. The latter motif can also be seen on two different packaging treatments.

The crown jewel of the promotion will be headphones from the Danish brand AIAIAI with an engraved Budweiser logo. Pictures of those haven't been released, so use what you see here to let your imagination run wild.

Bud Heavy's previous partners — Before launching its BudxStreet collection last year in India, Budweiser had previously worked with brands like Supreme, Been Trill, Undefeated, and Alife. Given how well known the beer's imagery is, it's not surprising that the graphic-focused world of streetwear would be so eager to work with it. Right now, you can even buy Bud's high-fashion collaboration with Moschino.

If you're outside Japan, sorry — Given that we're talking about a raffle requiring a purchase within the boundaries of Japan, you're probably SOL if you live anywhere else. Your only hope is a piece eventually finding its way to the resale market, which could fetch a high price.

If you are in Japan, congratulations! Cop one of those killer boxes of beer and head here to enter the raffle. The odds still aren't in your favor, but hey, at least you've got a chance.