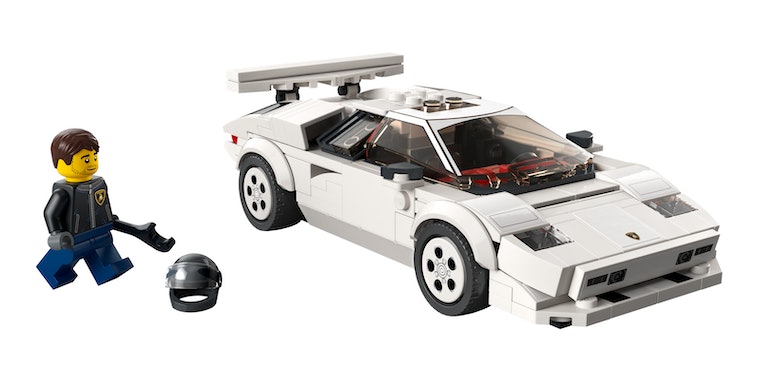 Lego revealed its latest Speed Champions sets for spring 2022 and they’re all hitting, especially the Lamborghini Countach. Lego also included classic Ferraris and modern race cars and they all look like instant cops for any car enthusiast out there.

Since most of us will never be a professional Formula 1 driver or have enough money to blow on these amazing cars, at least Lego is letting us admire the incredible design of each of them as cool display pieces. Sure, the Lego bricks don’t exactly replicate the curves and overall shape of some of these cars, but that’s not going to stop me from showing these off.

Undeniably cool — For the new Speed Champions sets, we have to start with the iconic Lamborghini Countach. Lego decided to replicate the LP500S version of the classic Lambo in all white. The angular styling of the Countach looks pretty well translated into Lego bricks and the car design still manages to look like a work of art. The Lego Countach comes with 262 pieces and includes a Lamborghini-branded driver, but I’m sure we’ll all be re-enacting this amazing scene from The Wolf of Wall Street instead.

Lego included another old-school favorite from around the same era as the Countach, the Ferrari 512 M. Obviously, Lego had to go with the classic Ferrari red look and the set includes 291 pieces alongside a Ferrari-branded figure. Jumping from the 1970s to the modern era, the latest Lego Speed Champions set also has the Lotus Evija, an all-electric hypercar that the British car designer revealed in 2019. The real Evija’s production was limited to 130 units, but at least you can get the Lego version of this modern sports car that includes 247 pieces.

The Legofied version of Ferrari’s 512 M.Lego
Lego really nailed the rear detail of the Lotus Evija.Lego

The Lamborghini, Ferrari and Lotus Lego sets are all single sets, but Lego is also putting out two double sets with Mercedes-AMG and Aston Martin. If you’re more into Formula 1, Lego put out a double set that includes the Mercedes-AMG F1 W12 E Performance car that F1 racer Lewis Hamilton pilots and the Mercedes-AMG One hypercar concept. The Mercedes set totals 564 pieces and has a mini Lewis Hamilton figure alongside a generic driver figure.

Lastly, Lego’s double set for Aston Martin includes the Valkyrie AMR Pro and the Vantage GT3 with its lime-green detailing throughout both. This set includes 592 pieces, including two driver figures that have racing suits, helmets, wigs and wrenches.

Lego love — The single car sets will retail for $20, but the double sets will cost $40. Lego is planning to release all five in March. It’s worth noting that it’s not the first time Lego released a brick version of a Lamborghini. Back in May, the company put out its version of the Lamborghini Sián FKP 37 for $380, making for Lego’s most expensive car set to date. If you’re wondering about the price difference, the Lego Sián FKP 37 is way bigger with 3,696 pieces and has actual working parts. Some people may still judge and say Lego are just toys, but they have put out some really cool sets recently, like the Super Mario Bros., Sonic the Hedgehog set, and even the Nintendo NES set that our deputy editor Raymond Wong made functional.