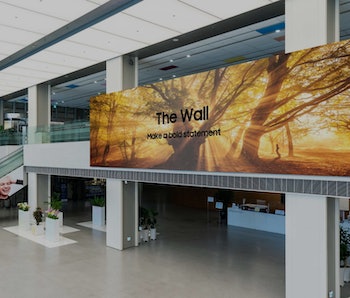 Samsung unveiled its latest iteration of the imposingly large model “IWA” video screen, and wow is it a beast-and-a-half. “The Wall,” as it is appropriately called, features 1,000-inches of display space, 8K resolution, 1,600 nits peak brightness, and 40 percent smaller LEDs for better color uniformity and picture contrast. The modular design also allows for some impressive arrangement possibilities — apart from a 15,360 x 2,160-pixel horizontal display, “concave, convex, ceiling, hanging, inclined and L-type configurations” are also possible, according to New Atlas.

“Samsung is dedicated to creating the most innovative displays for those at the forefront of video creation and brand experiences,” said Hyesung Ha, Samsung Electronics’ Senior VP of Visual Display Business in a press release. “The 2021 The Wall is our most immersive and versatile display yet, giving businesses complete control to create their dream environments.”

While Samsung touts uses including control rooms, bougie residences, and film studio sets, we all know what The Wall is really meant to do — create inescapable capitalist monolith-screens everywhere from malls to airports to city skylines. Get ready to have those Samsung foldable phones and tablets pushed even harder on you in public spaces soon.

Of course there’s AI involved in it, too — If the prospect of gigantic, looming 8K TVs advertising the latest car you can’t afford as you wait in line at the airport isn’t off-putting enough, Samsung notes in its press release that a number of artificial intelligence systems are involved to “enhance” the new models. Because of course they are.

“A new Micro AI Processor instantly analyzes and optimizes every frame of the video to deliver the best picture quality possible,” explains Samsung, adding that up to 16 different neural network models “trained in AI upscaling and deep learning technology” can help optimize images up to 8K while also “enhancing contrast and removing noise.”

Alright, so it could be put to good use — In the spirit of fairness, we will admit that Samsung’s newest The Wall lineup obviously can and will be put to some cool, innovative, and helpful uses. Just picture these babies hanging in a NASA or NOAA control room, or in a Disney film studio providing killer backdrops for The Mandalorian’s next season. See? We aren’t total Debbie Downers all the time.

More like this
Chris Stokel-Walker
5.23.2022 5:35 PM
Literature
I had Google AI narrate my audiobook. The results were... not terrible.
Will Gendron
11 hours ago
Tech
Google's text-to-image generator takes you on a truly wild ride
Jackson Chen
5.19.2022 3:20 PM
Design
Samsung’s Pokéball charging case turns your Galaxy Buds 2 into cosplay