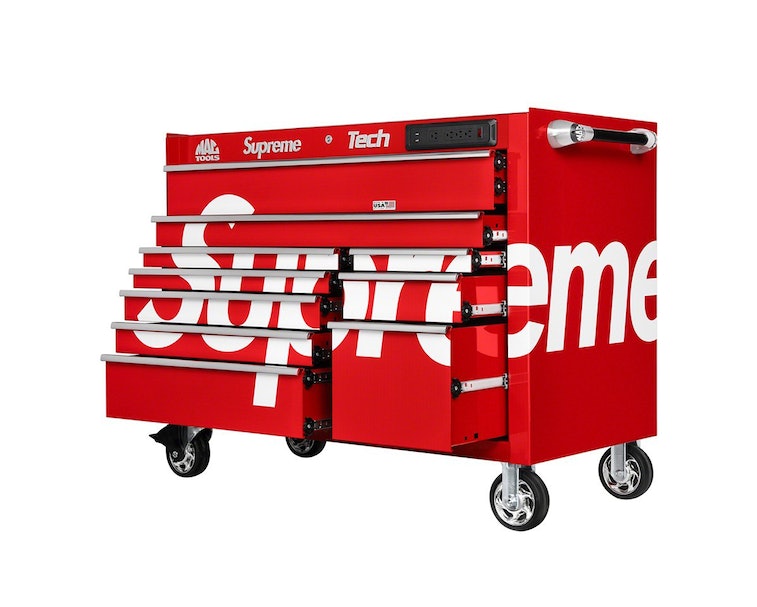 The literal biggest Supreme release of the season is set to land this week, as the brand announced its Mac Workstation will be a part of Thursday's drop. The massive tool cabinet comes plastered with Supreme's logo and will, therefore, be in high demand. Supply, on the other hand, is likely to be highly limited, making this one of the most difficult pickups of the year.

Let's pretend you're interested in the functionality — The tool cabinet at hand is Mac's Tech T5025 Double-Bay Workstation, which comes with an embedded power strip with USB ports and ten drawers. A Uni-Key lock system allows each of the drawers to be locked and unlocked simultaneously with one key. The top two drawers are five and three inches deep, and the whole thing can be moved easily with heavy-duty six-inch wheels. Even to the layman's eyes, it looks like a pretty damn good tool cabinet.

Don't expect many units — Similar to this season's bicycle and other physically large releases from the past, the Supreme Mac collab should be even more limited than usual. We're talking around 100 units, most of which will probably only be available to purchase by friends and family of the brand.

And cost, whoo boy. You've got to call Mac for pricing details on the standard edition, and Supreme hasn't yet announced its own price. We should be expecting it to cost around $5,000, at a minimum.

So good luck this Thursday — With Supreme releases still limited to its website at 11 a.m. ET Thursday, expect only those armed with bots to be successful. And if you're still determined to make this beefy unit yours after inevitably missing out, expect an exorbitant upcharge on the resale market. That bicycle we mentioned is now listed on eBay for no less than $6,000 and all the way up to $21,000.

Really, you should just hope that one of these makes it somewhere unexpected like a NASCAR team's garage.