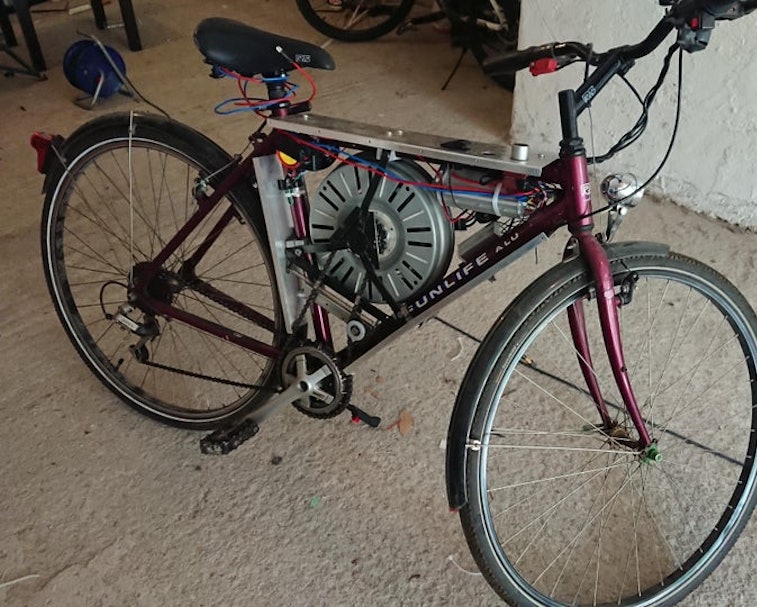 In an example of ingenuity that will likely make any electric-bike enthusiast grin, a Reddit user named @jimminecraftguy has created an e-bike out of a washing machine. He's repurposed the motor to power his aging, 10-speed commuter bicycle, and the results are impressive. Scarily so. The bike's estimated top speed is around 68 mph (110 kmph), which is highway speed in some places.

Unlike typically pricey e-bikes that include high-end components and specialist parts, Reddit user jimminecraftguy's aptly named "Spin Cycle" makes few changes to the bicycle, Hackaday reports, beyond adding the motor (tweaked to run on 48 volts), batteries, a throttle and — eventually — some panels or other covers to make it look less conspicuous. But that doesn't stop it from keeping up with four-wheeled vehicles out on the road.

Why are e-bikes typically expensive? — Aside from the batteries and motor that all e-bikes require — and that tend to push the starting price near $1,000 — some e-bikes like those from Dutch company VanMoof include onboard computers and displays, smart security features, and other custom features and high-end controllers that can push the price north of $2,000. Custom e-bikes, however, can cut the component cost significantly, but instead take time, expertise, and patience to build.

Users of Reddit and YouTube have implored the creator of the Spin Cycle to share the build details, which makes us wonder just how many people have old washing machines lying around they'd like to repurpose.

You're going to get pulled over — It seems like our e-bike creator is located in Greece, where local safety rules apply to gear, lanes, busy roads, and more, but tend to be a little more relaxed than, say, England or parts of the U.S. As one Reddit user points out, you'd expect the Spin Cycle is something of a police magnet. They're right, but that hasn't stopped the Spin Cycle's owner from taking it out.

"They already stopped me once," they say. "Greek police officers don't know what the f**k to do in this situation. The thing falls between a low HP motorized vehicle and an e-bike so they can do nothing other than tell me to slow down if I'm going fast."