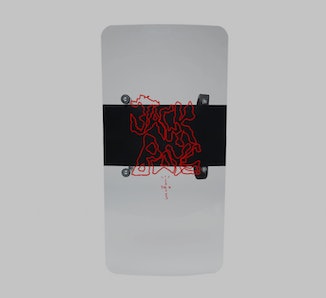 Travis Scott is now offering fans more than just hoodies and t-shirts — he's gone full tactical with his merch. To celebrate the album release of Jackboys, a compilation of artists from Travis' Cactus Jack record label, he's now selling a limited-edition riot shield that dons the group's logo. The Jackboys Riot Shield, which also features the same Cactus Jack branding seen on Travis' sneaker collabs with Nike, is priced at $120 and includes a digital download of the album.

It's perfect for hypebeasts who want to rage while sporting some tactical gear — although the Jackboys site does throw in a disclaimer that the riot shield is "for display purpose only."

More outrageous items — If you thought Travis selling a riot shield was wild, there's more where that came from. The Jackboys merch collection also includes a 12-inch JBL subwoofer (sold out), $45 neon mask, $250 car cover, $300 racing helmet, $120 tool box, and, why not, a $195 fire extinguisher. To cap things off, Travis is putting a Cactus Jack 1988 BMW E30 M3 up for auction, which is one of the cars pictured in the Jackboys album cover.

Tactical goes hype — It might surprise you, but Travis isn't the first one to take riot shields to a hypebeast level. In August of 2018, streetwear brand Anti Social Social Club dropped a riot shield of its own, complete with its subtle monochrome logo. Not surprisingly perhaps, it sold out instantly, so I wouldn't expect the Jackboys' riot shield to be available for much longer on Travis' online shop.